check me out – a blog post that isn’t MONTHS after the last one!

We’ve had a few events to go to so that has really fired up my sewjo. Today’s post is about my take on the Folkwear 240 Rosie the Riveter dungarees/overalls….that I may or may not have muslined and purchased fabric for in  2019 for Asheville Frocktails – embarrassing or what! Despite the delay, I’m so glad I finally made these!

Back in 2019 when I bought this pattern at a Folkwear open day after having seen a sample, I knew I wanted to take the pattern and make them more modern and less of a costume. 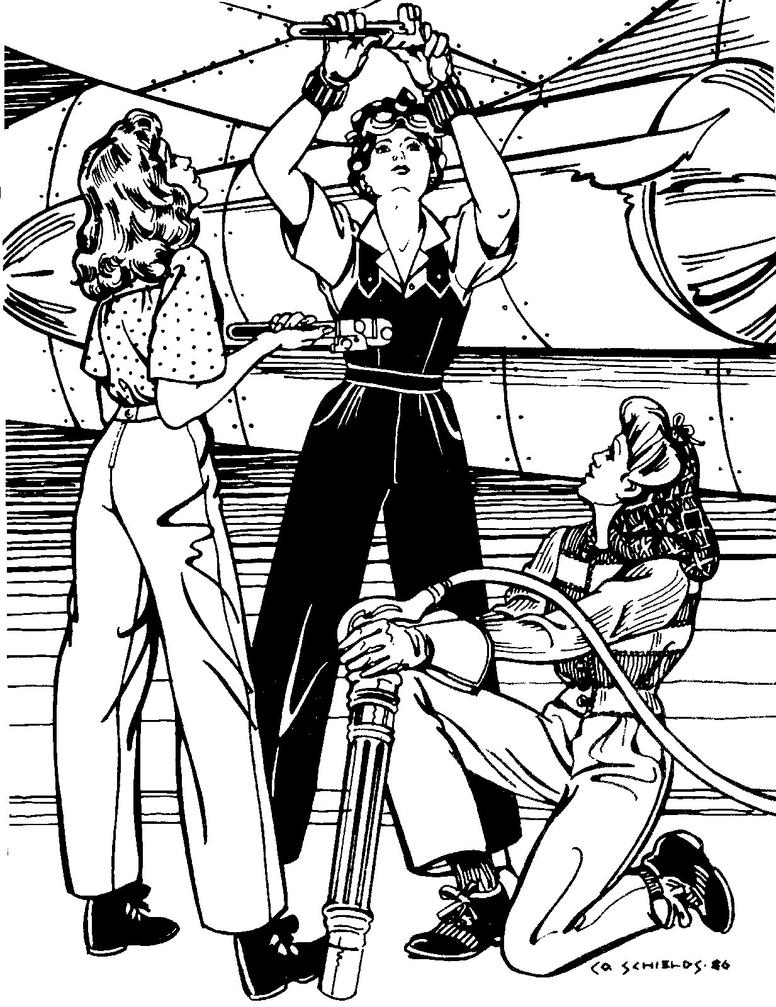 After I muslined them, I realised an important thing for me was removing the waist pleats. I have a protruding stomach and those pleats added so much fabric in that area, it made me feel very self conscious.

At first I was going to turn them into darts but then I decided to remove them completely.

I used this tutorial as a starting point, but I’ll be honest, I made the rest up as I went along. In hindsight I probably could’ve/should’ve left them as darts. 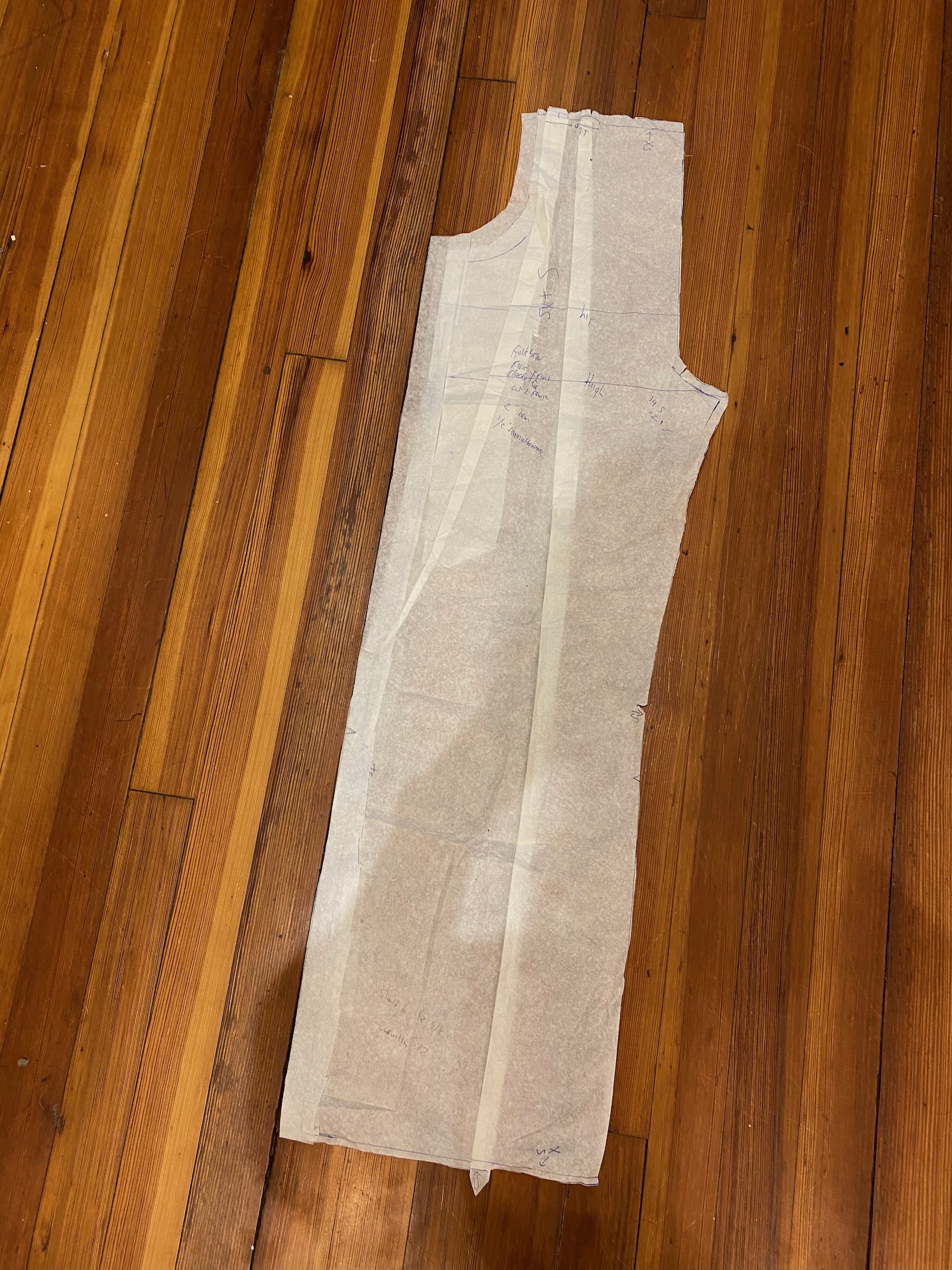 At this point, I got distracted by a different pattern and made a dress for Frocktails instead.

Roll on 2 years, we’d been invited to a few weddings and I wanted to make something for them.  I’d already muslined these and purchased the fabric, a linen from fabric.com called “Unicorn”, so I figured why not finish them!

I tried on my muslin and realised there were a few more things I needed to change. 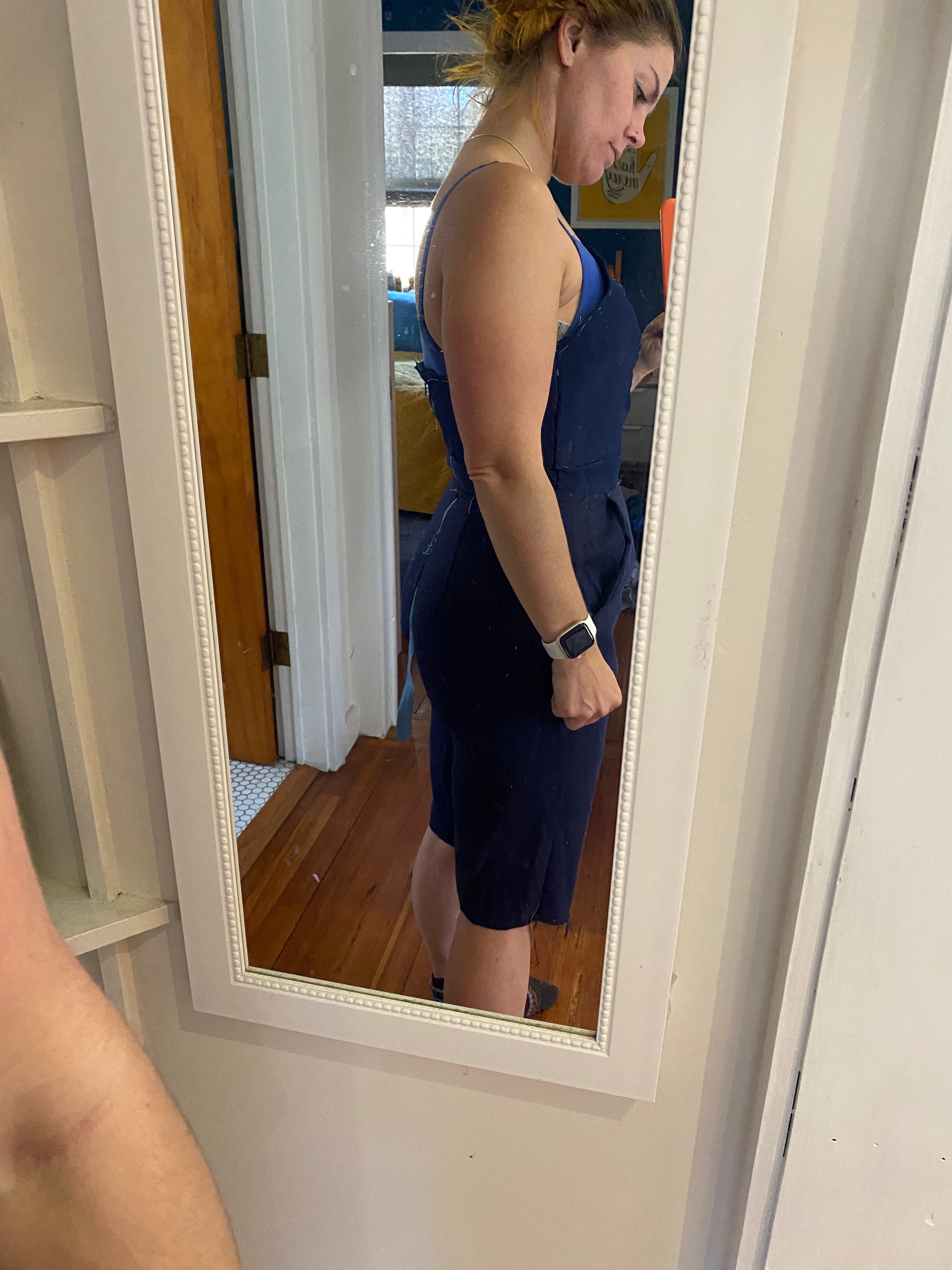 I narrowed the bodice front as it was gaping at the side. I did this by pinching out the excess and then rotating it into the waist dart. 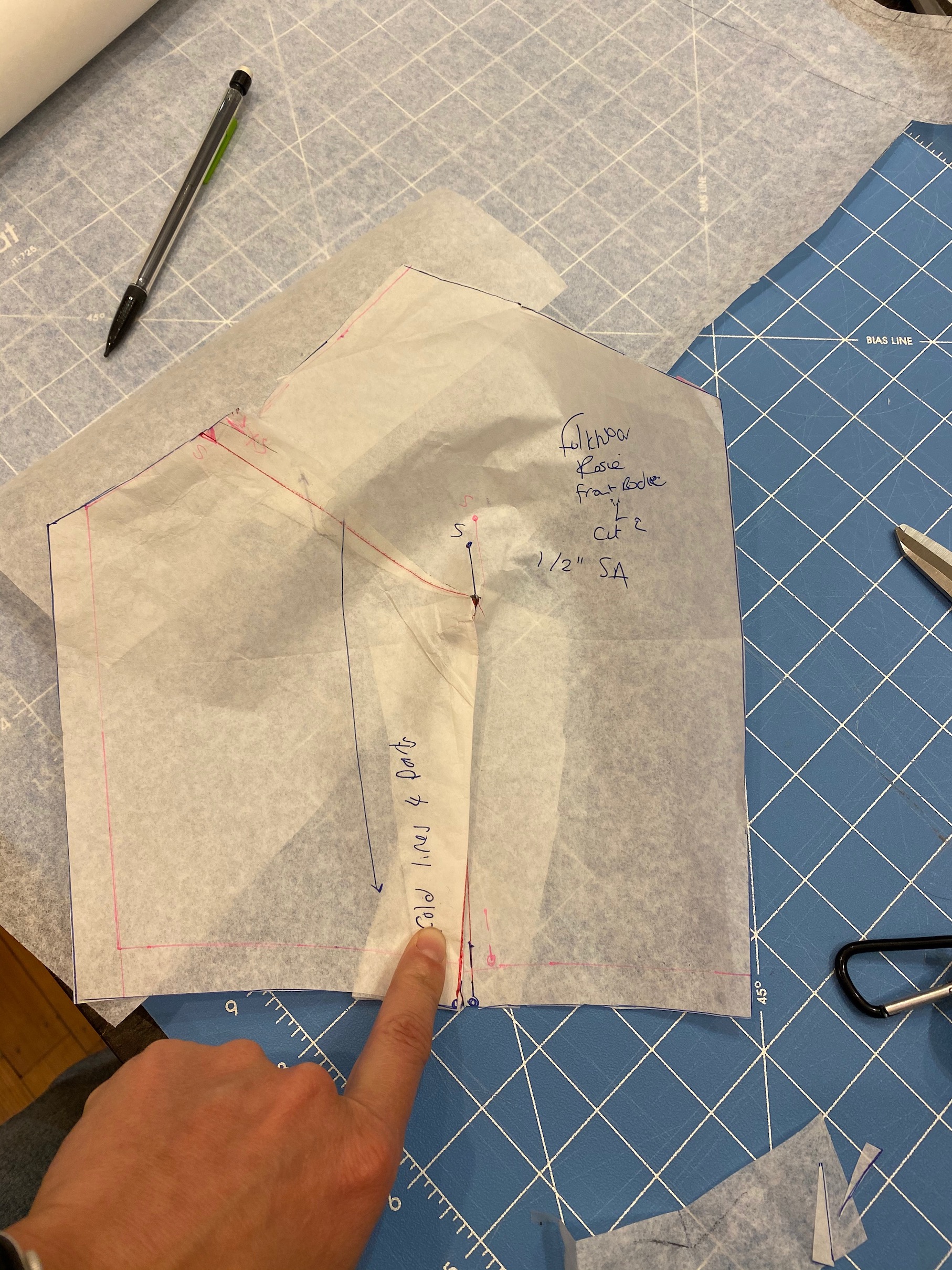 I also decided to raise the bodice back so could wear them without a shirt underneath, making them more ‘fancy’. 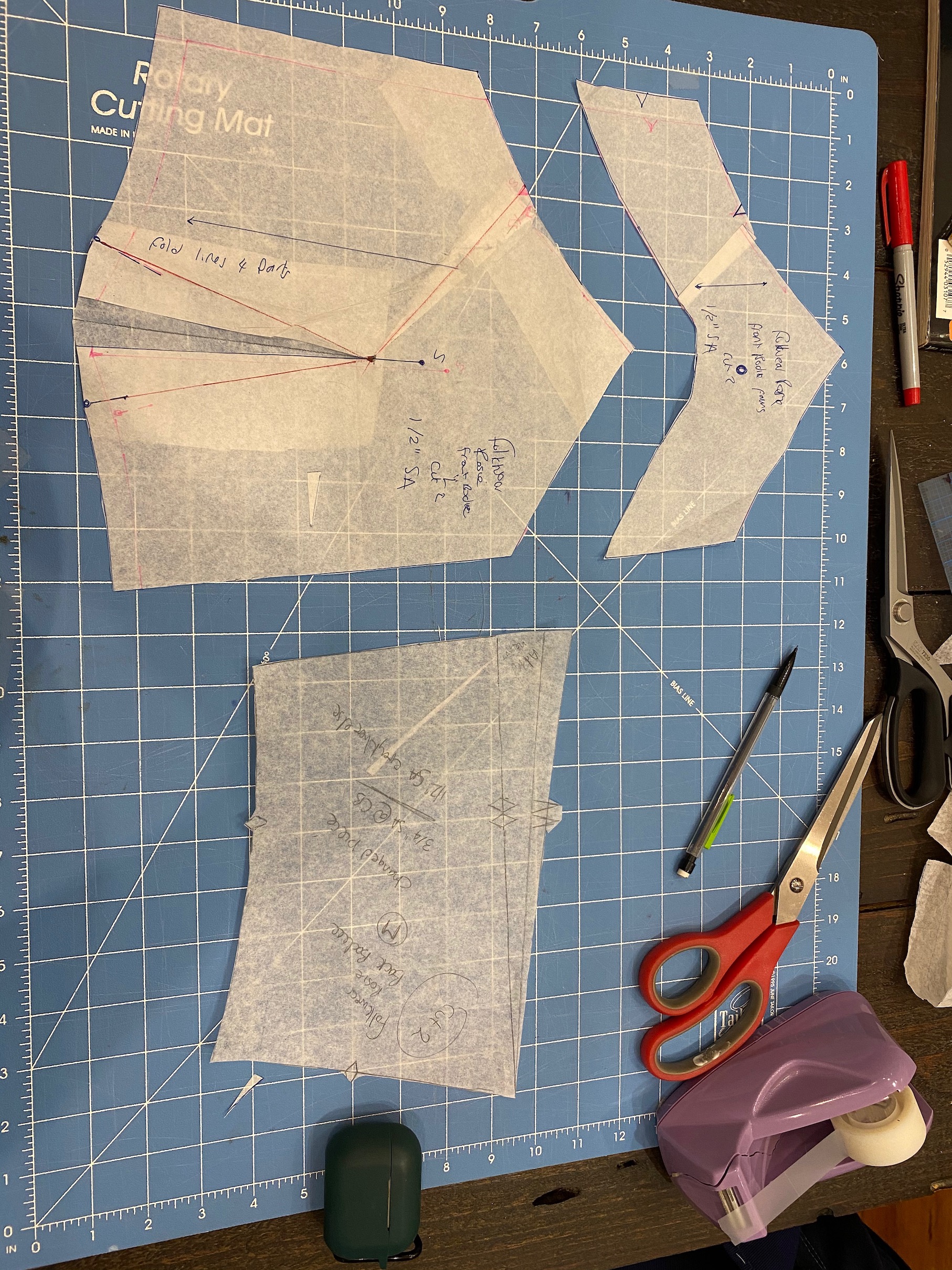 Once I was happy with my muslin I dived in to my fabric. This is where the problems started!

Unfortunately I didn’t realise/acount for the fact the fabric I’d used for the muslin had stretch but my linen did not, so they ended up too tight! I was devastated as I’d serged all my seams so unpicking them was a nightmare.

From the waist to lower hip there’s now only 1/4 seam allowance so I’m not sure how long they’ll hold together – eek.

So that was problem no.1.

After letting them out I kept having a problem with the pockets, there would be a little fold on the bottom of the opening. I finally pulled the pants apart AGAIN and realised I’d not alligned the pieces properly (I think largely due to changing the trouser front put forgetting to alter the pattern pieces). Luckily this fixed that so then, issue no. 3: 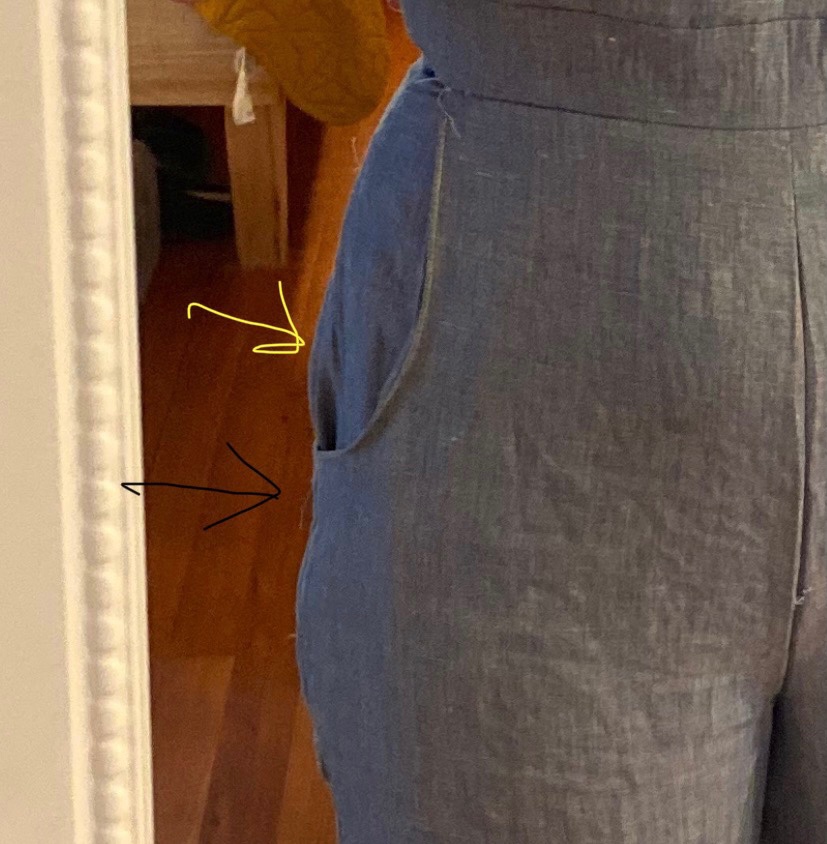 The back bodice and the straps. The back bodice kept ‘peaking’ outwards at the top so I had to UNPICK MY ZIPPER – ARGH- and fold that in, meaning my bodice back is off grain but oh well. With the straps, I had to shorten them a lot, which makes sense on my petite torso but no back what angle I pinned them, one of them always had a weird fold where they joined the bodice. I think in the future I would move them out towards the side a little more which would hopefully eliminate that issue and allow me to wear a cross strap bra.

You can see what I mean below: 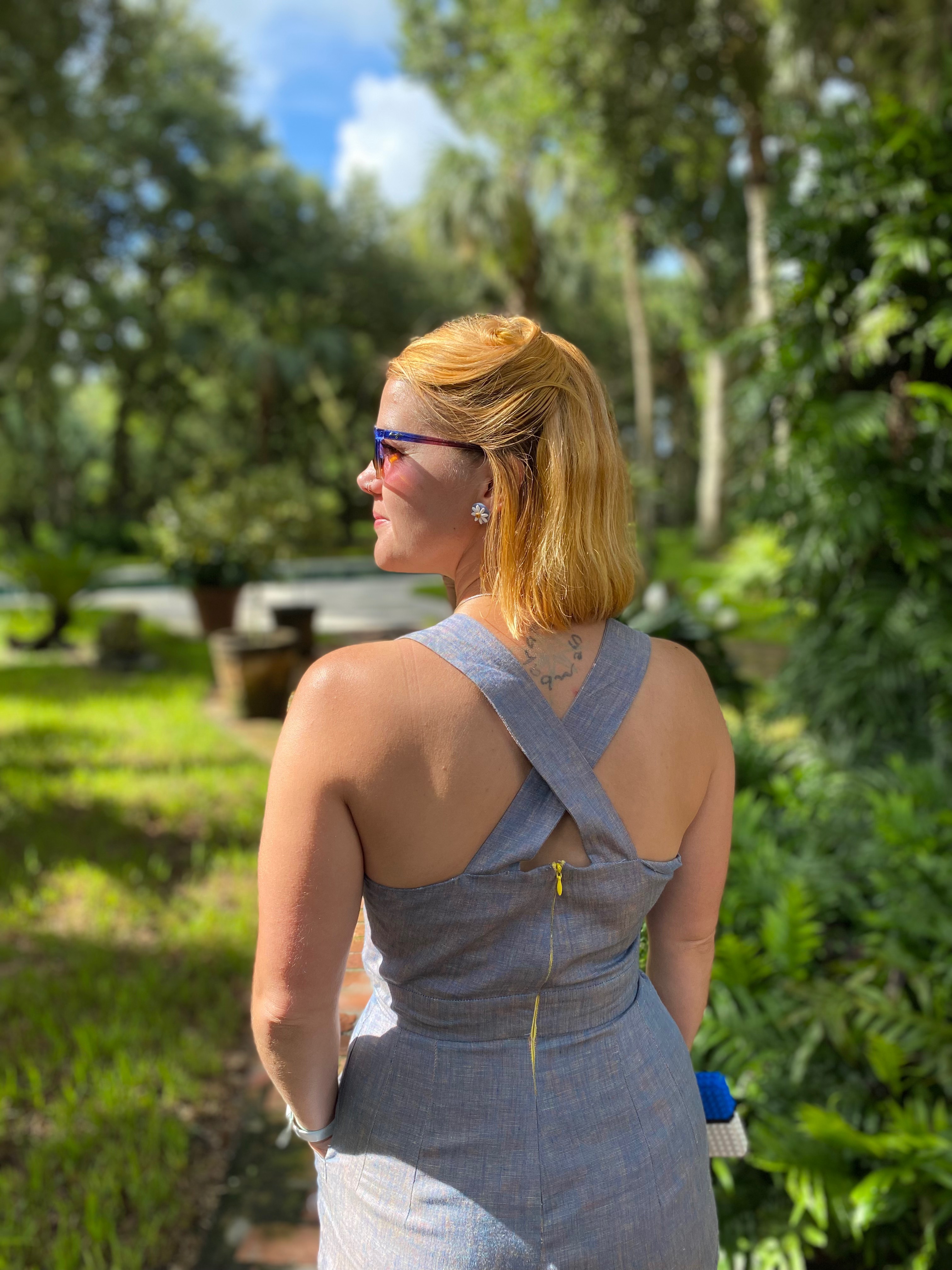 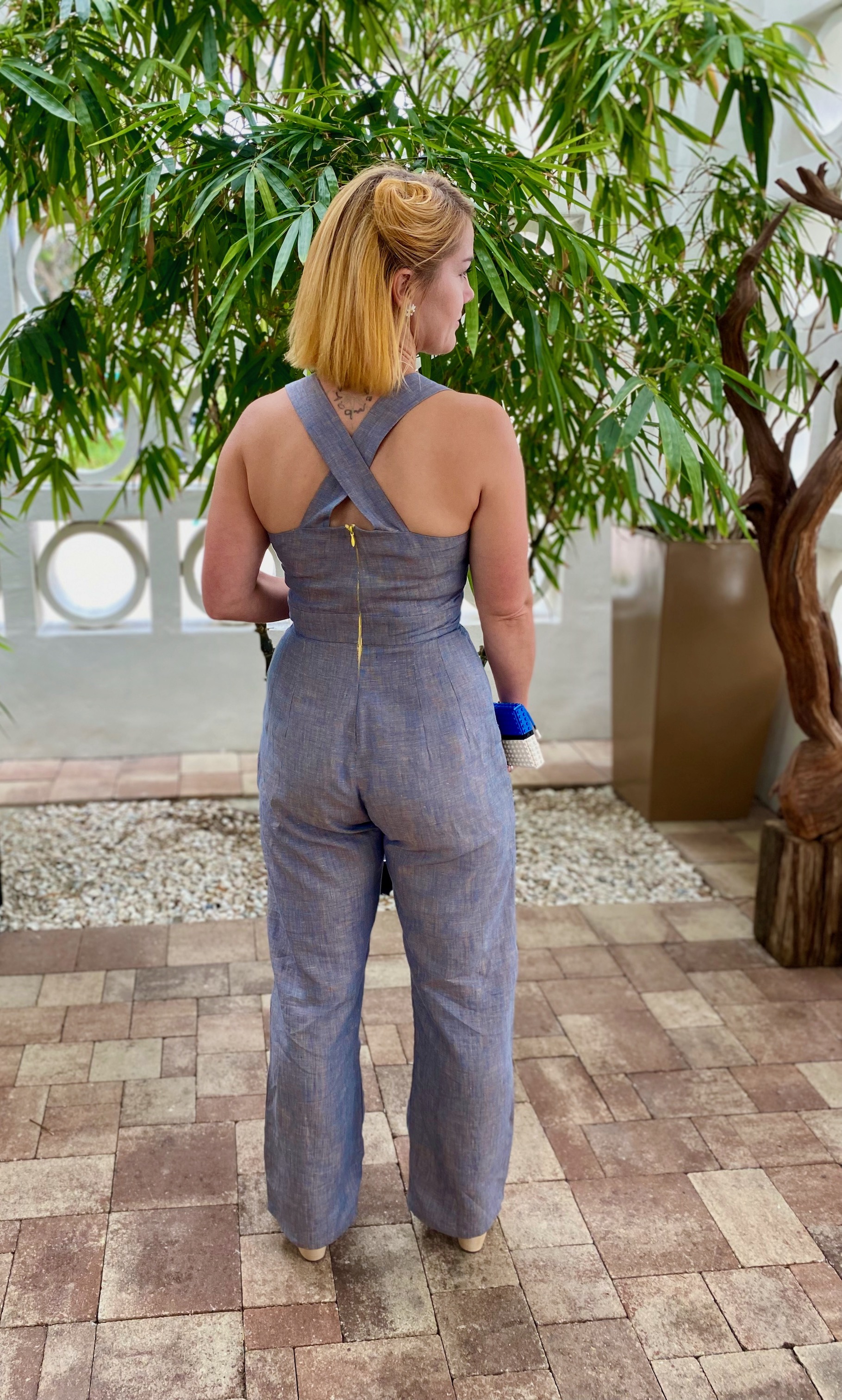 Once the issue’s were solved/at a place I could deal with, I covered some buttons and hemmed them, and they were done!

Now for the real talk..I made these for an LA wedding but despite letting them out, I still felt too self conscious to wear them.

A month later however, having worked hard with a personal trainer to start getting back to a pre-covid size I felt comfortably enough to wear them to a small family Florida wedding instead. This actually worked out well as thy were perfect for beach wedding! 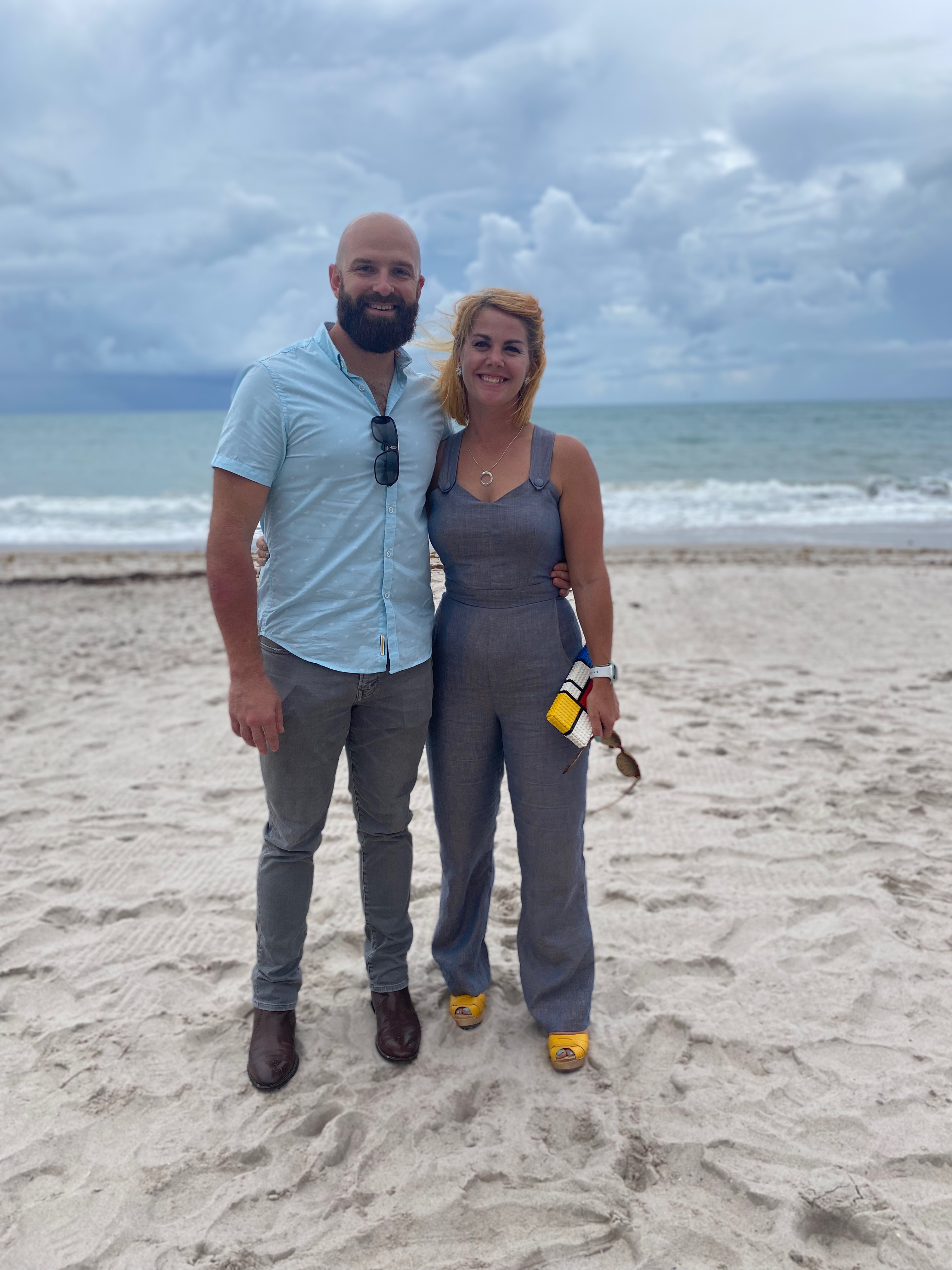 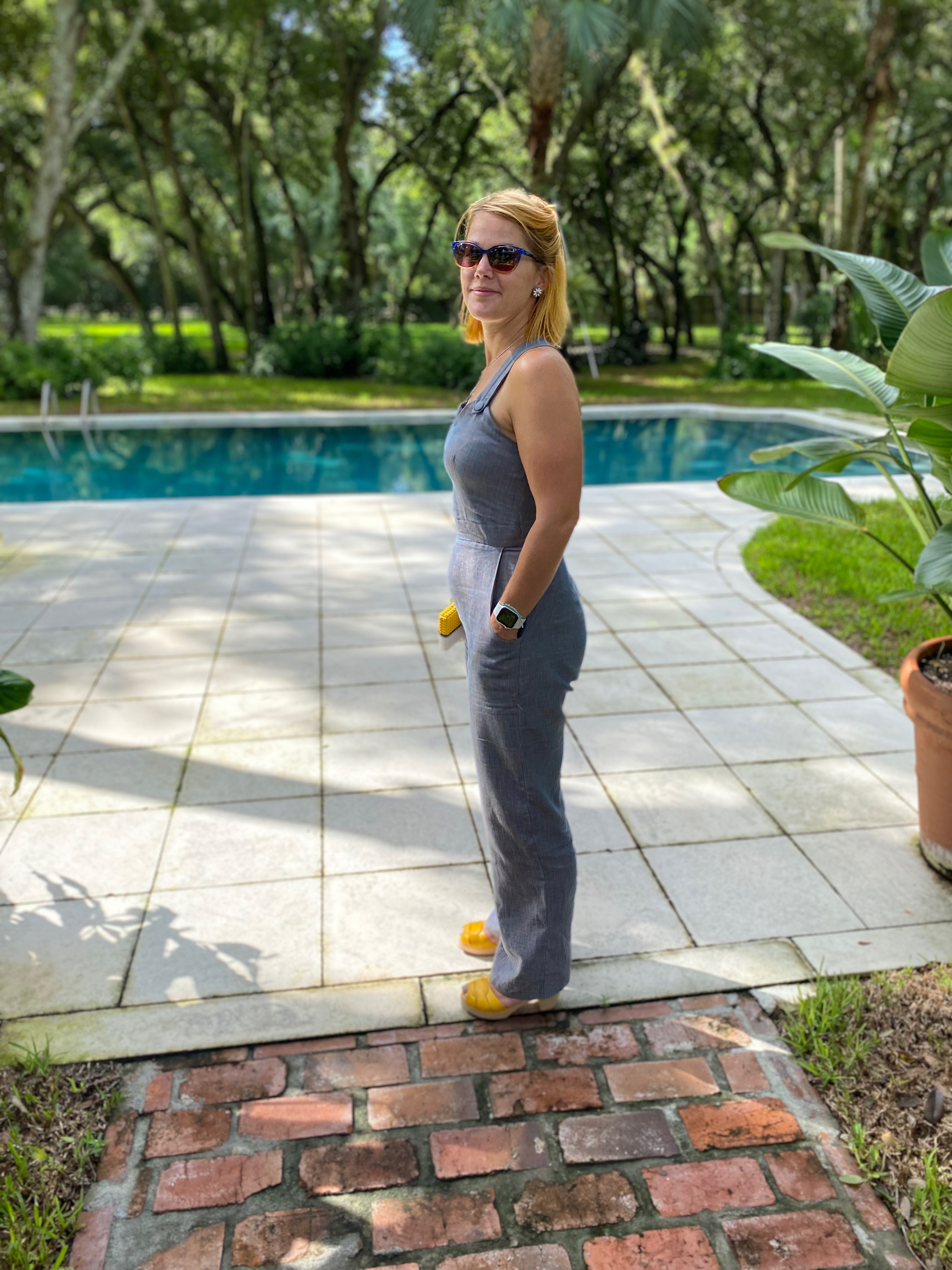 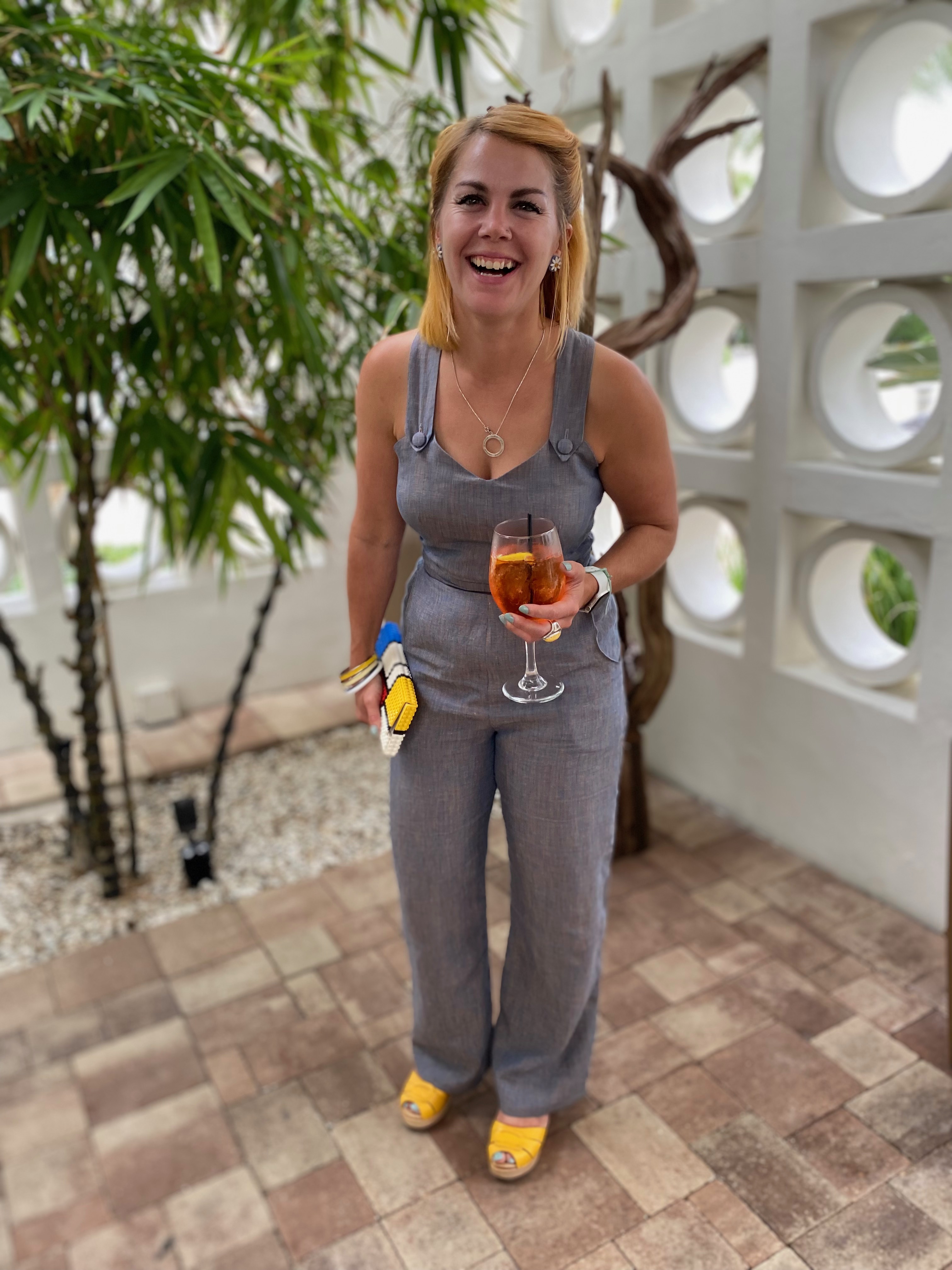 They sure were a battle but I really loved the outcome. What do you think?

It’s the weeeeekeend! Which means (hopefully) 2

Anyone who knows me knows I’m really not into pi

It’s dress inspiration time! There were SO man