Well hello there my little lovlies,

I hope you’re all having a wonderful day. As I mentioned in my last post, Joe and I recently bought a house so there really hasn’t been any sewing on the cards for me lately. The closest I’m going to get is writing this blog post about a make from just before our trip.

While it was a pretty simple one, I’m so happy about it as it lead me to figure out and hopefully resolve a fit issue I’ve had since starting sewing – hooray!

As always on the run up to my birthday my sister will ask me if there is anything I’d like. It’s always a tough one because there is always something I’d like (I don’t tend to buy myself much) but at the same time I love surprises, so telling someone what I’d like doesn’t leave much room for surprises but this year we came up with a compromise. Of course I wanted sewing stuff (what else would I ask for?!) so I sent my sister an email with patterns I liked plus fabrics that would go with them from the wonderful Guthrie and Ghani (my mum was in the UK at the time so she could bring them – hooray for personal shipping!)

She then let my nieces pick a pattern and the fabric they liked – cool or what? Oh and it got better because little did I know, but my mum got in on the act too so I ended up with two much sought after Deer and Doe patterns and two lots of fabric to make them with – pretty sweet birthday haul me thinks. 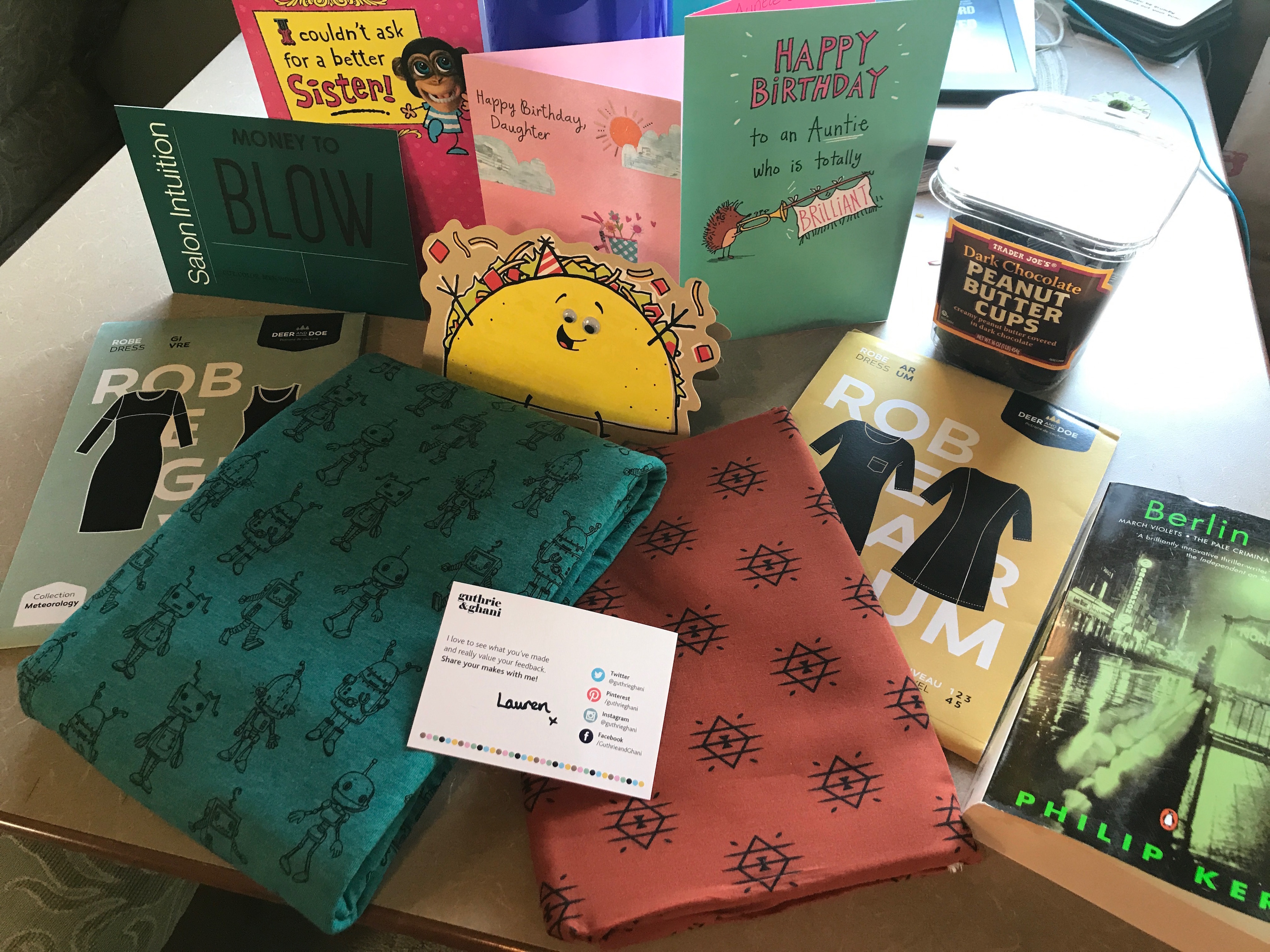 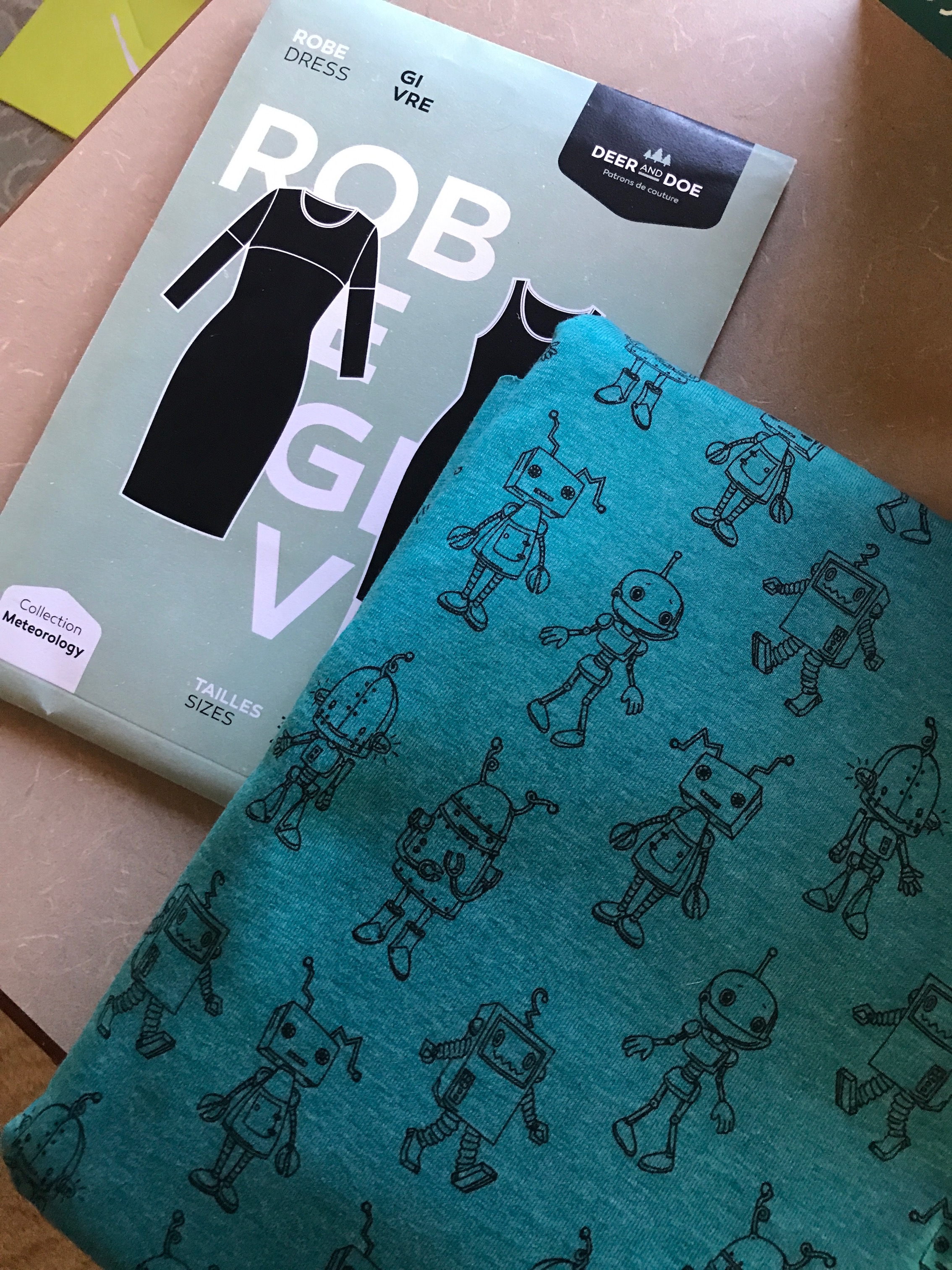 We didn’t have all that long before we were due to set off on our trip to the UK and Germany and I really wanted to have the robots made up so I could show the girls when I got there. I’ve wanted to try Deer and Doe patterns for some time now as I have quite an hour glass figure, perhaps even a pear shaped one, and a few of my Insta sewing family had told me these patterns were designed for us more bottom heavy ladies out there.

Due to the robots being so cute and not wanting to waste it I decided to do a toile, even though it was in jersey and a pretty straight forward make, as I really do have some fitting issues with bodices. I decided to try it straight out of the envelope first of all – I cut up a t-shirt I’d made for Joe and he didn’t wear to save buying more fabric. 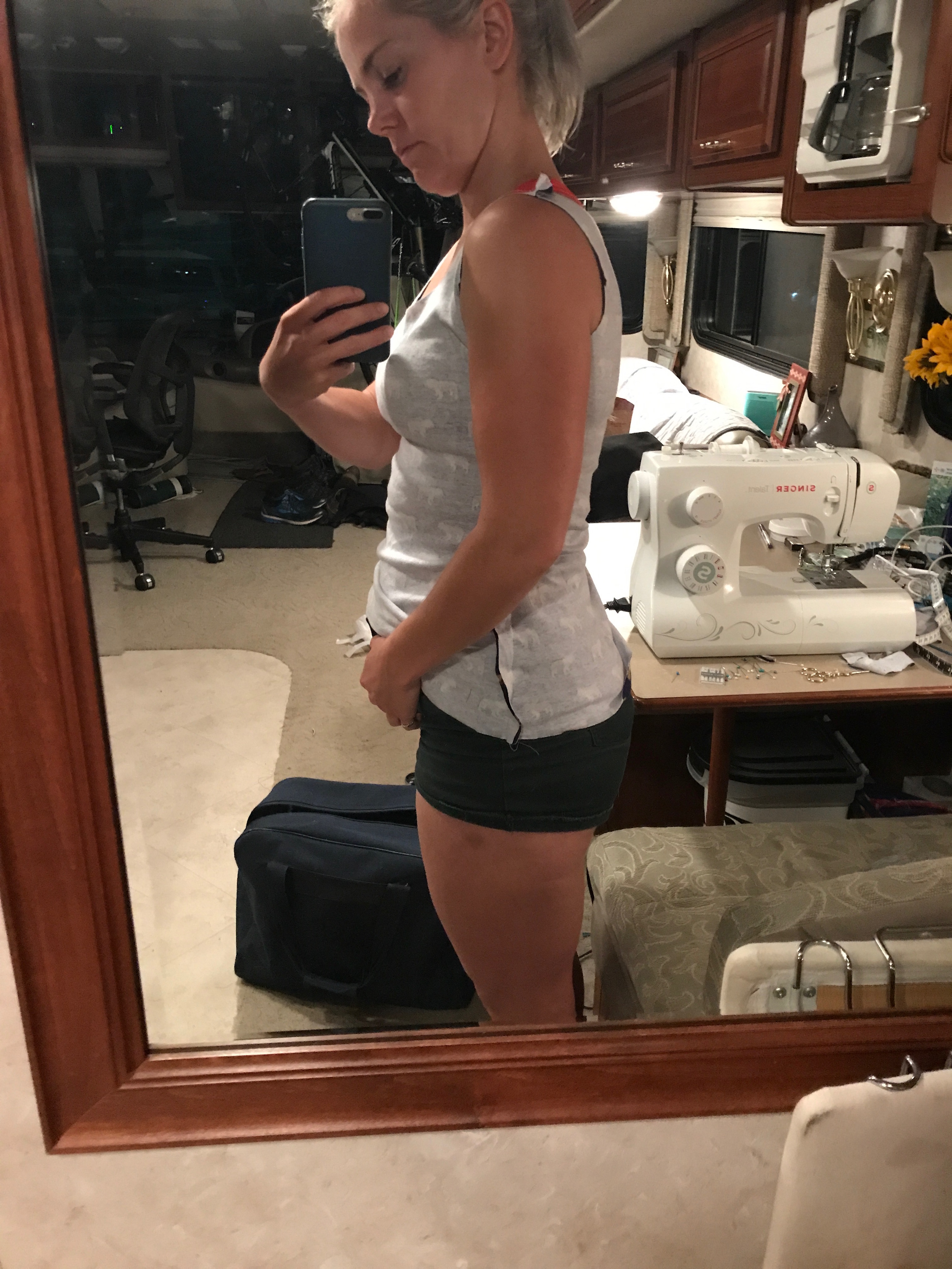 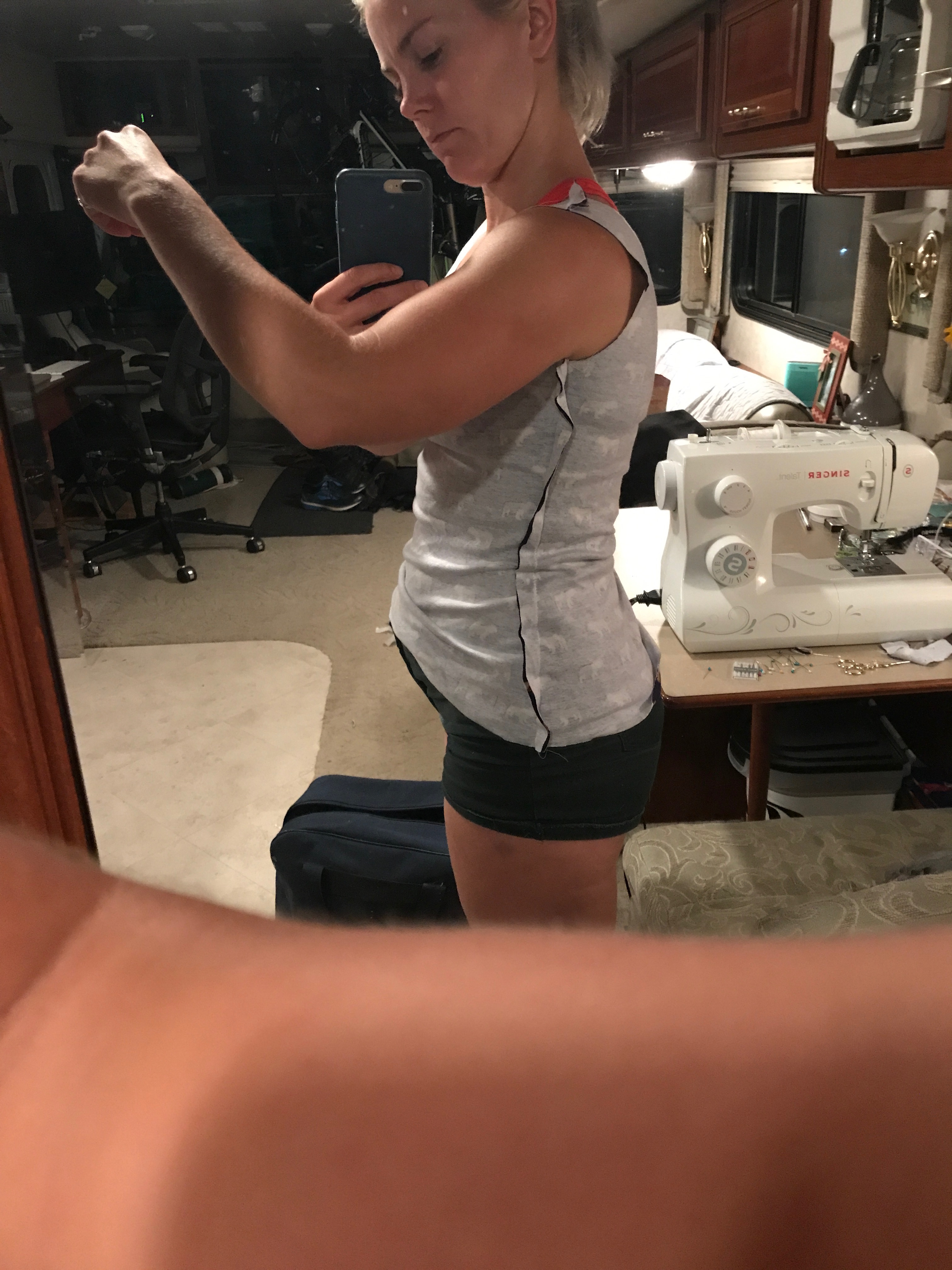 And yup, I had the same fit issues as always – a pooling or bunching up of fabric around my armpit at the front and gaping in the armhole at the back.

I’ve tried FBA’s before and while they helped they haven’t solved anything. I spent a good few hours looking into what this might be and for the first time ever someone mentioned something called ”petiting” – i.e. that if you’re short (I’m 5ft 2”) you need to figure out where your shortness is and shorten the pattern in that area. It stood to reason that I had too much fabric because my shortness was in my upper chest.

With help as usual from my sewing guru Jenn i.e. the_stitcher_and_gatherer and her friend Maria who is a petit sewer, I tried out an alteration that allowed me to shorten the top half my pattern. You basically fold out the excess across the chest, kind of similar to how you lengthen and shorten a pattern near the waist. I also did a forward shoulder alteration. There’s a huge amount of tutorials for these online but I’ve linked to the ones I used to give you a head start.

To keep with my resolution of reducing waste I went to the local Goodwill and bought a mans t-shirt to use as my 2nd toile fabric.

Low and behold – A T-SHIRT THAT FITS!! 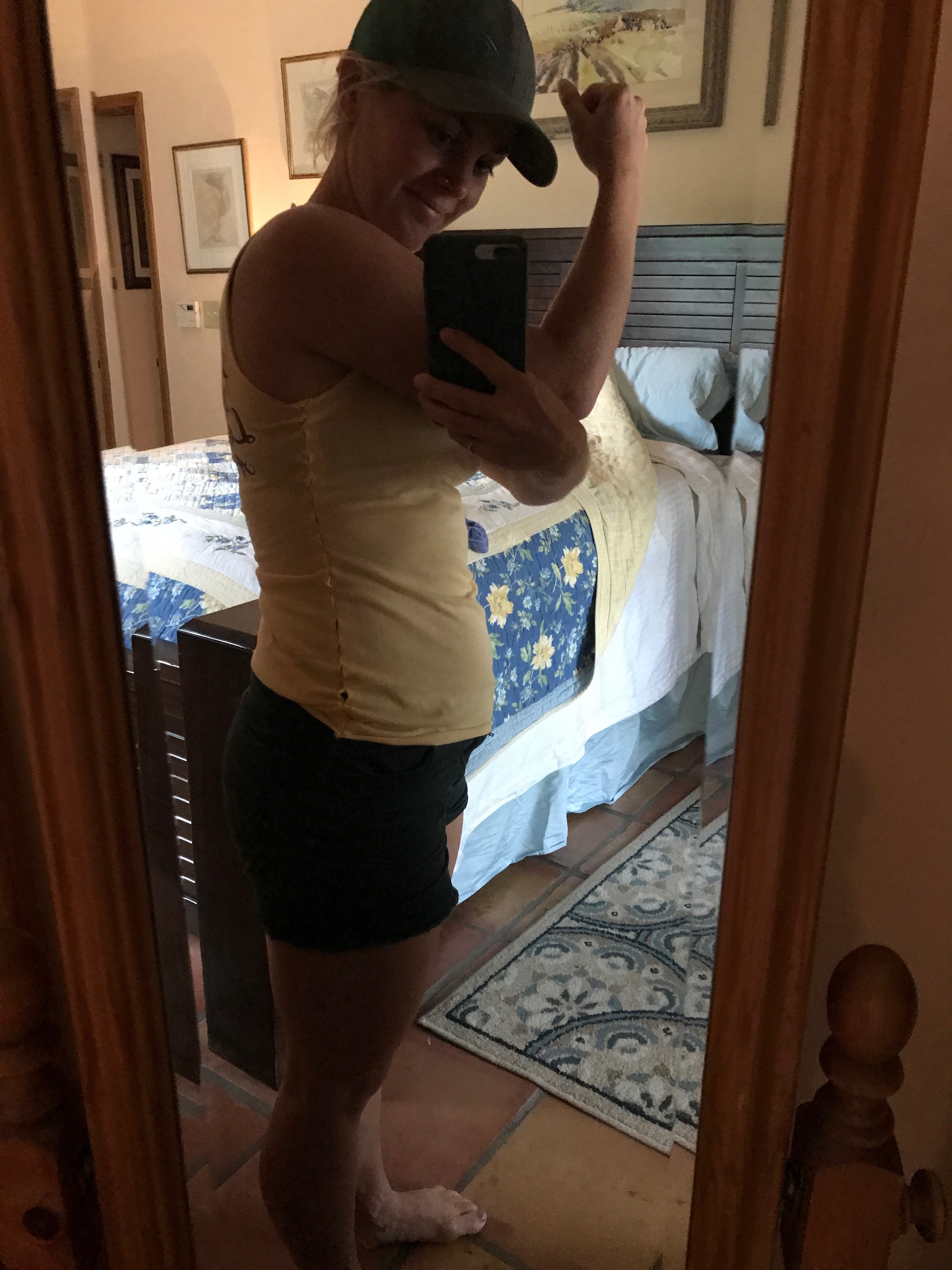 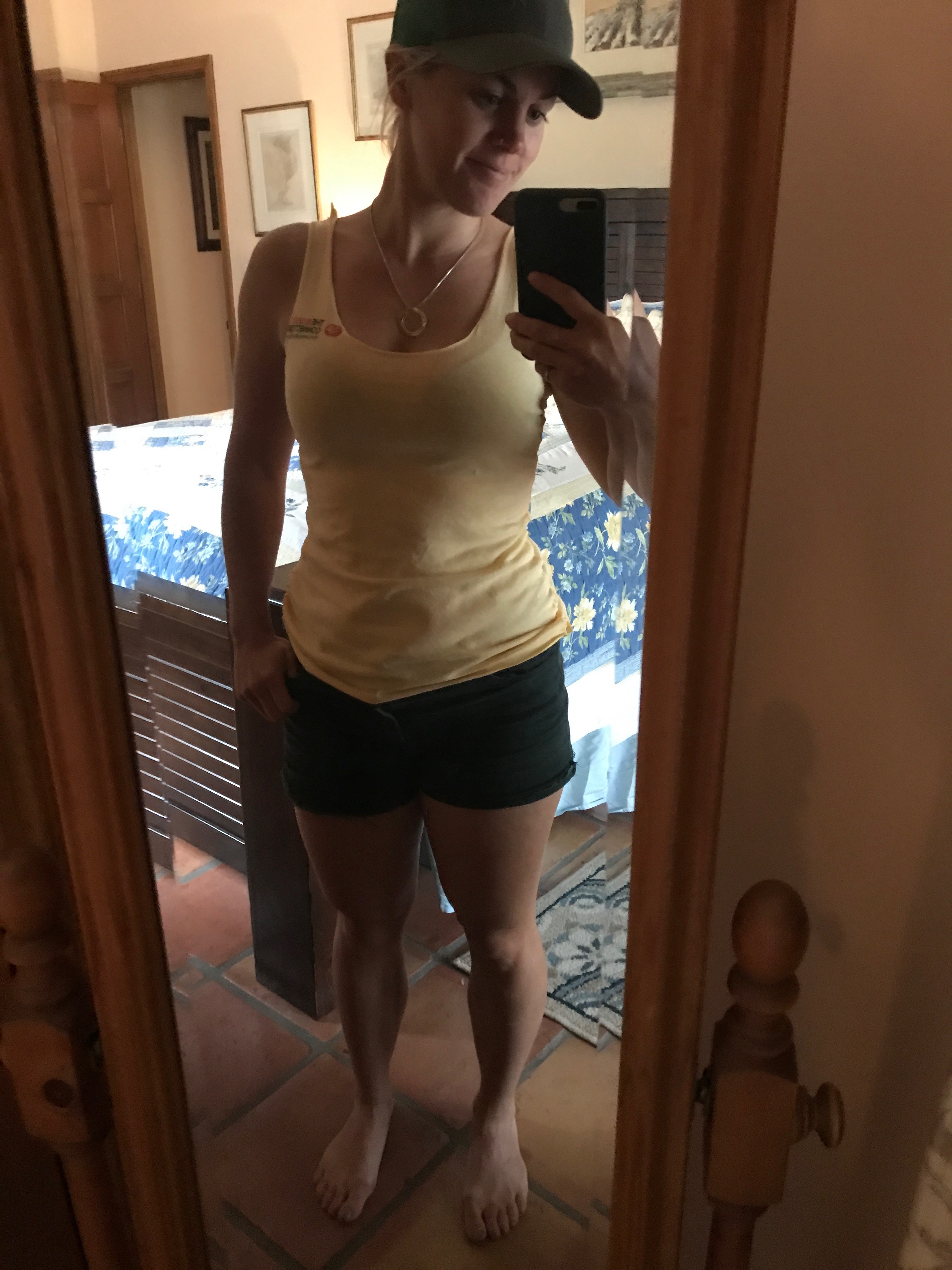 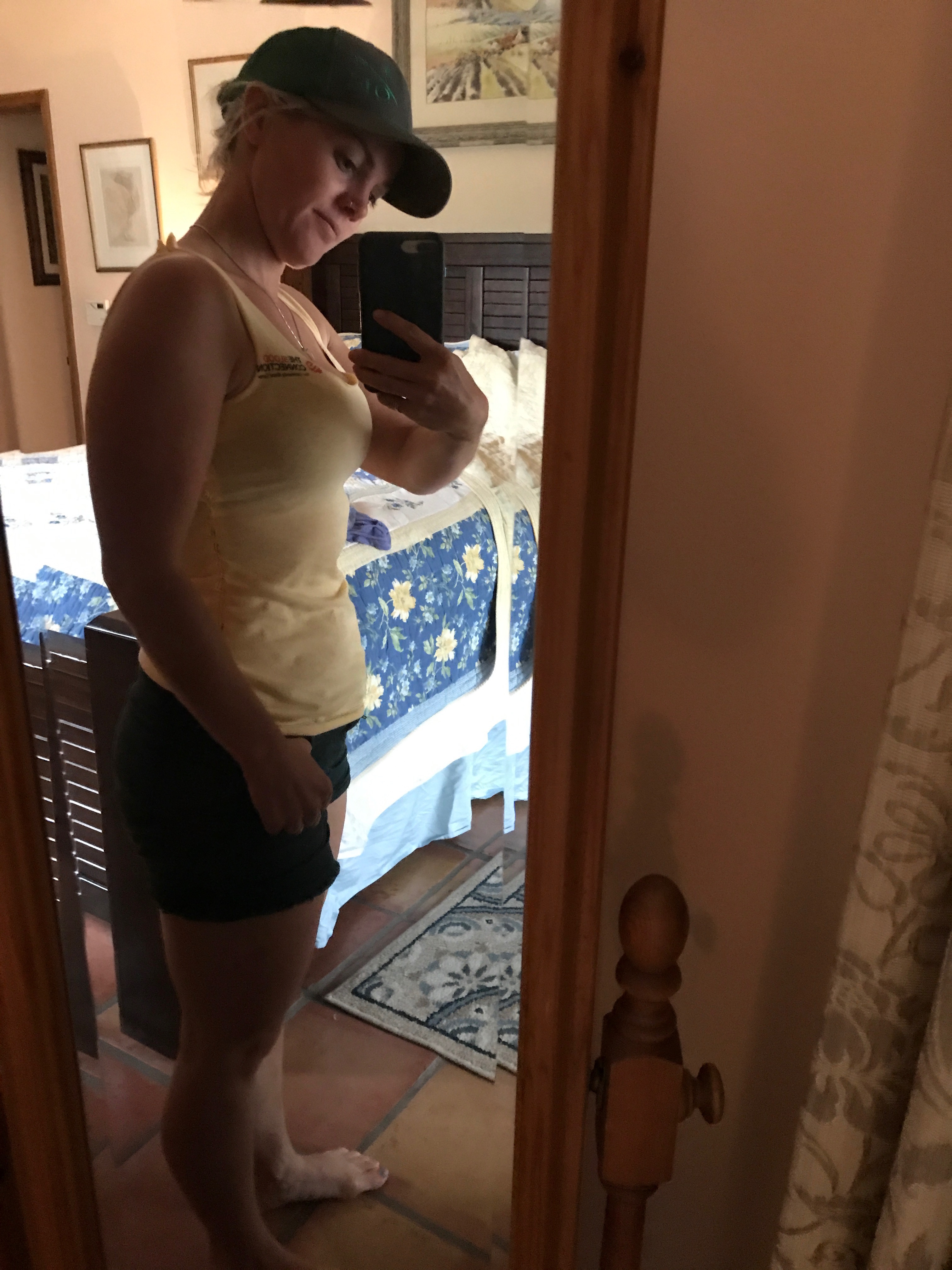 In case you’re worried about the weird side seams – I hand sewed it as I was house sitting for my parents that week so had no access to my sewing machine but wanted to continue with the project.

There was no gaping or bunching what so ever, I was so happy! And how perfect is that neckline?? Oh and I’d like to point out, this is the first ever pattern where the waist has fitted me straight out of the packet! Usually I have to take in the waist by over an inch, sometimes even more than two!

I think it is safe to say I’ve found my go to tank top pattern. I’m going to try adding some sleeves to the next one so that hopefully it can be my go to t-shirt pattern too.

My plan was to make the full dress not just the tank so I quickly drew out my new altered bodice together with the bottom half and cut into my precious robots. It too me so long to cut out as I was so paranoid of not getting them straight. I didn’t even attempt to pattern match, I’ll be honest.

It was such a quick make (once I’d got the bits cut- ha!), which is great as I was sewing it the day before we were due to leave.  I will admit however, I hadn’t sewn on the arm hole facings in my test runs (doh!) and it turned out they were too high for me so for this one I folded and hemmed. Next time I’ll have to remember to deepen them a little. 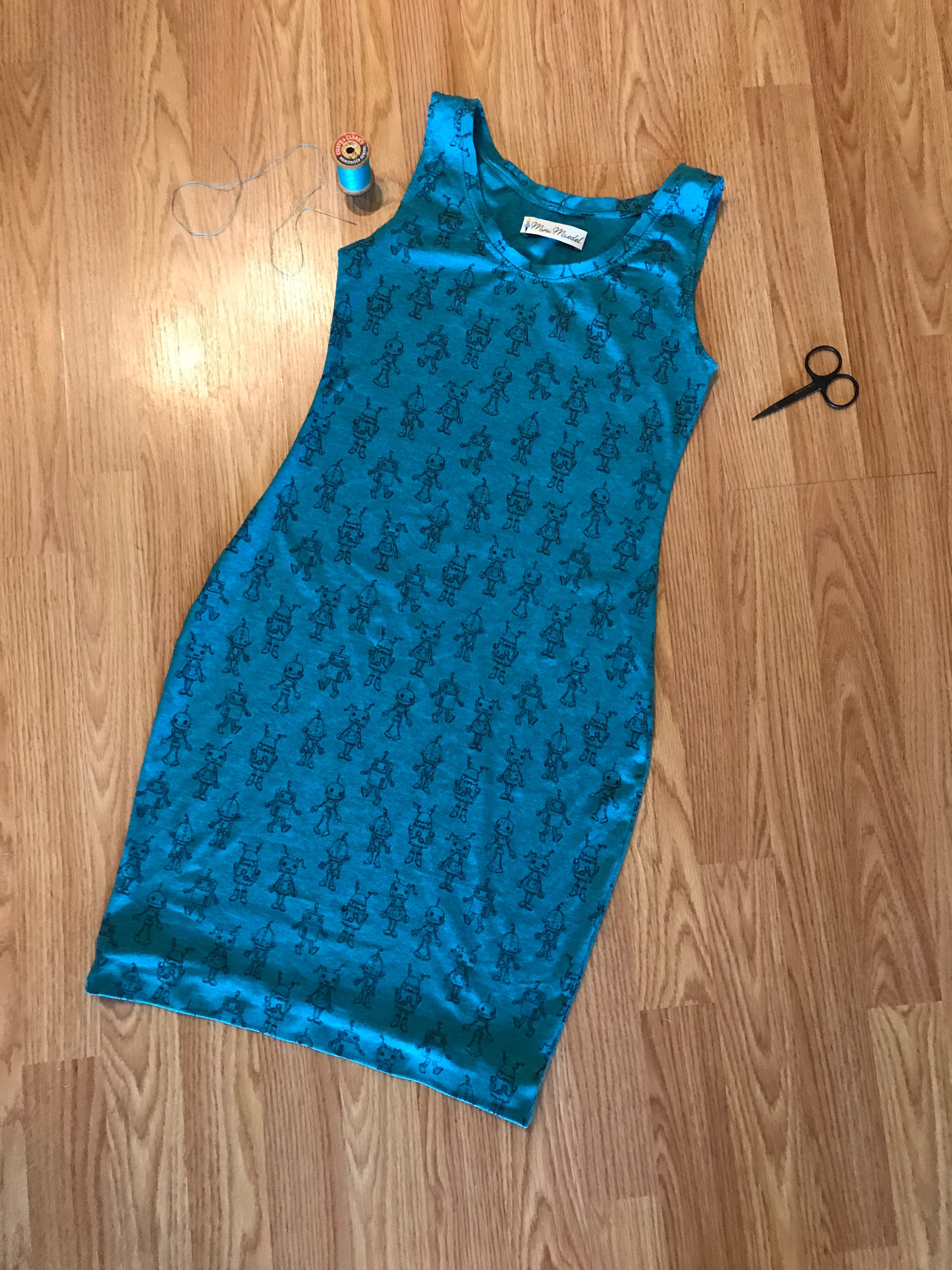 The dress fits like a glove – it is perhaps a little closer fitting that I would’ve gone for – this jersey has less stretch than my test fabric (totally still learning about knits).

Here it is from the back: 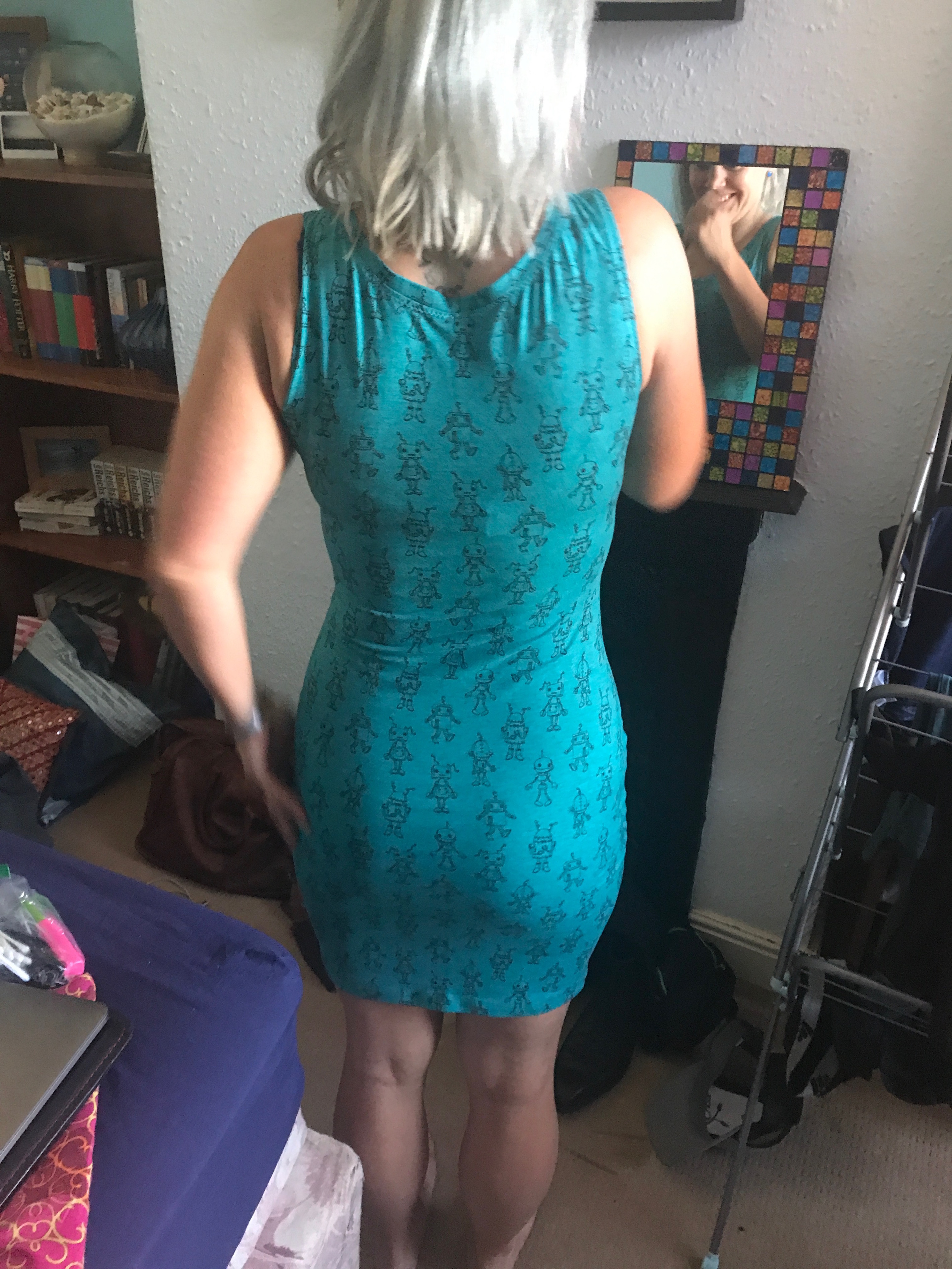 I’ll admit I not feeling at my best physique-wise right now so I’ve been wearing it under a skirt as a top for the time being. Hopefully after a few gym sessions I’ll feel more like wearing it in all its glory (toooo much good German bread!) 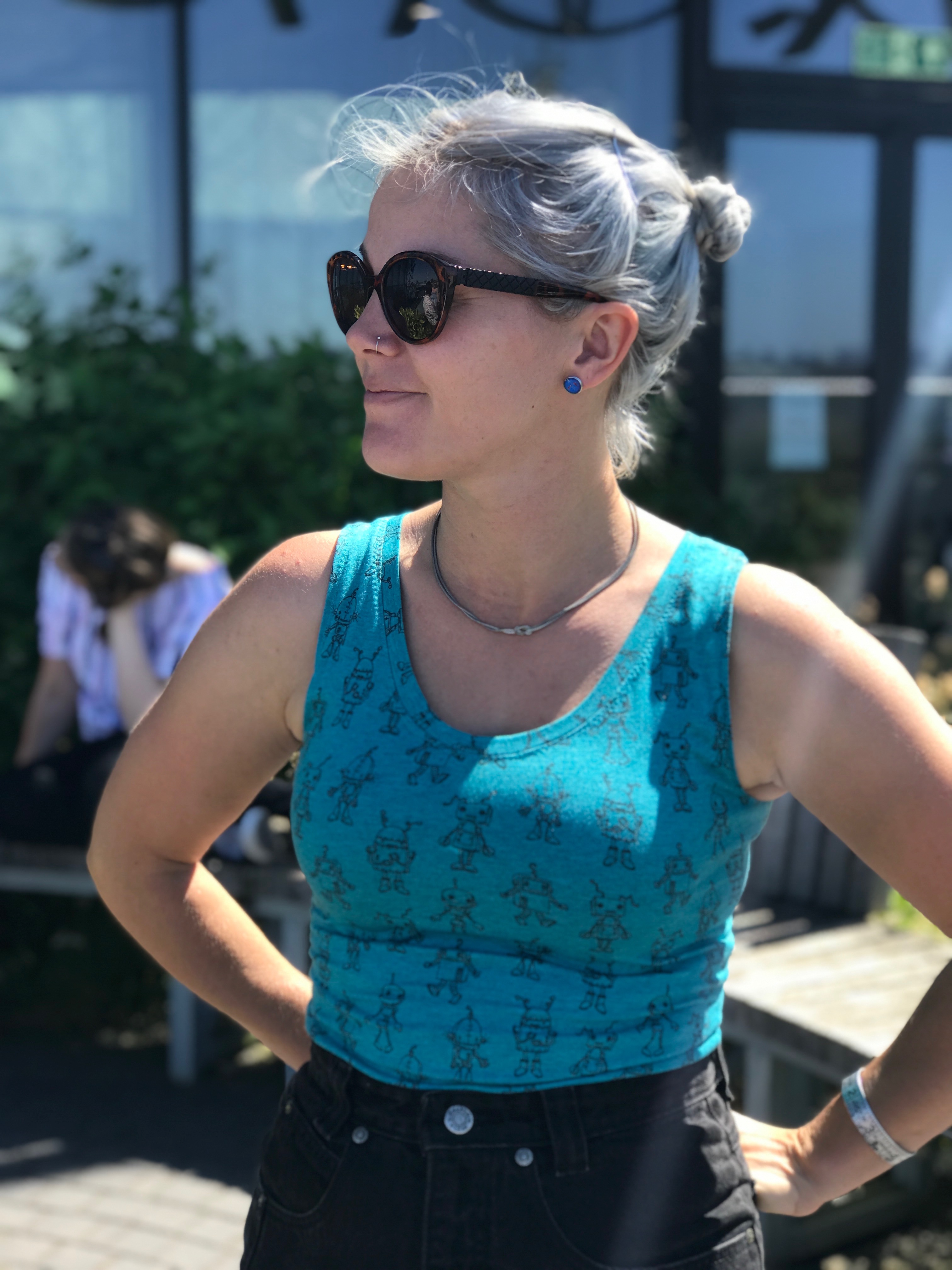 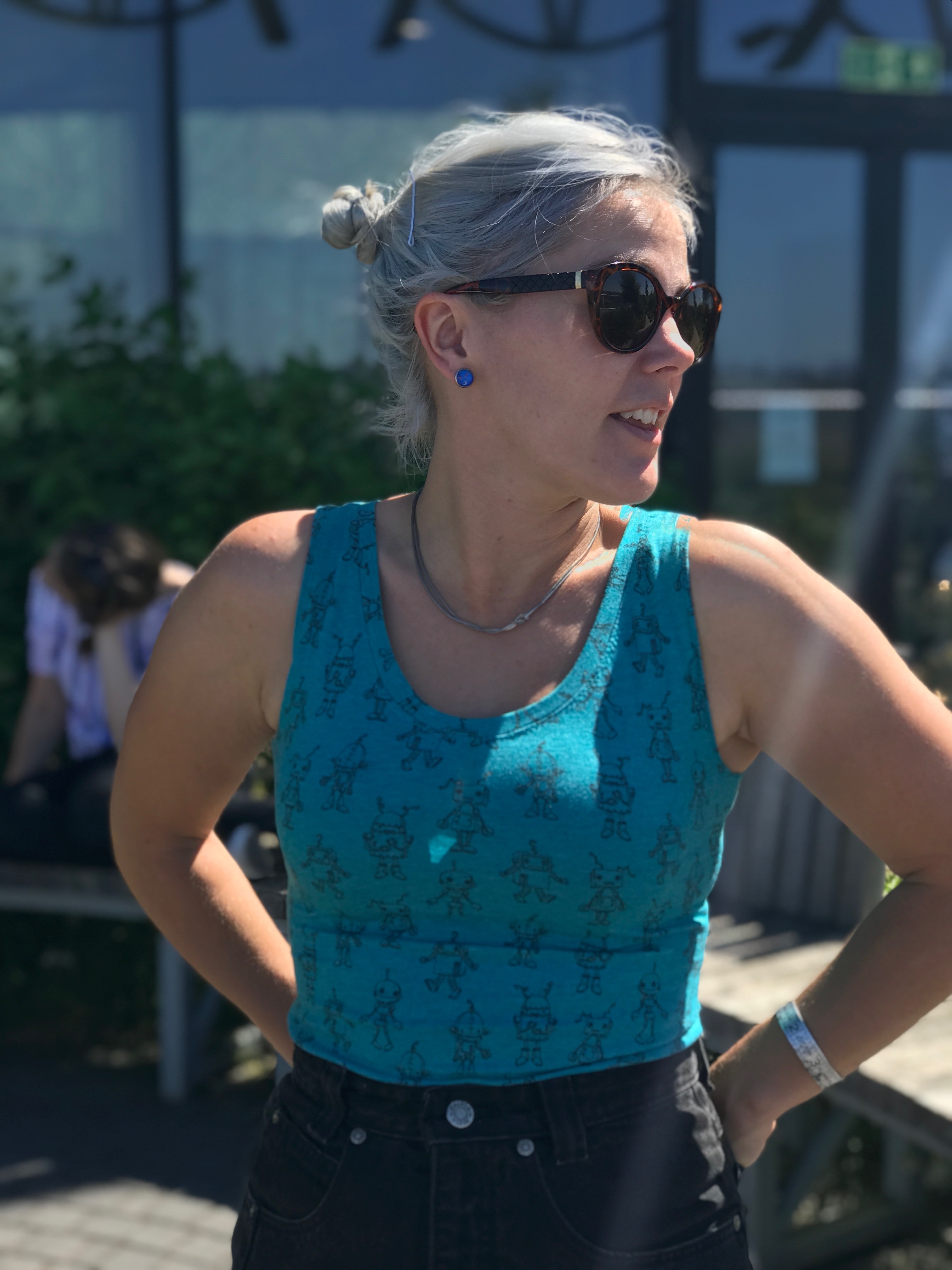 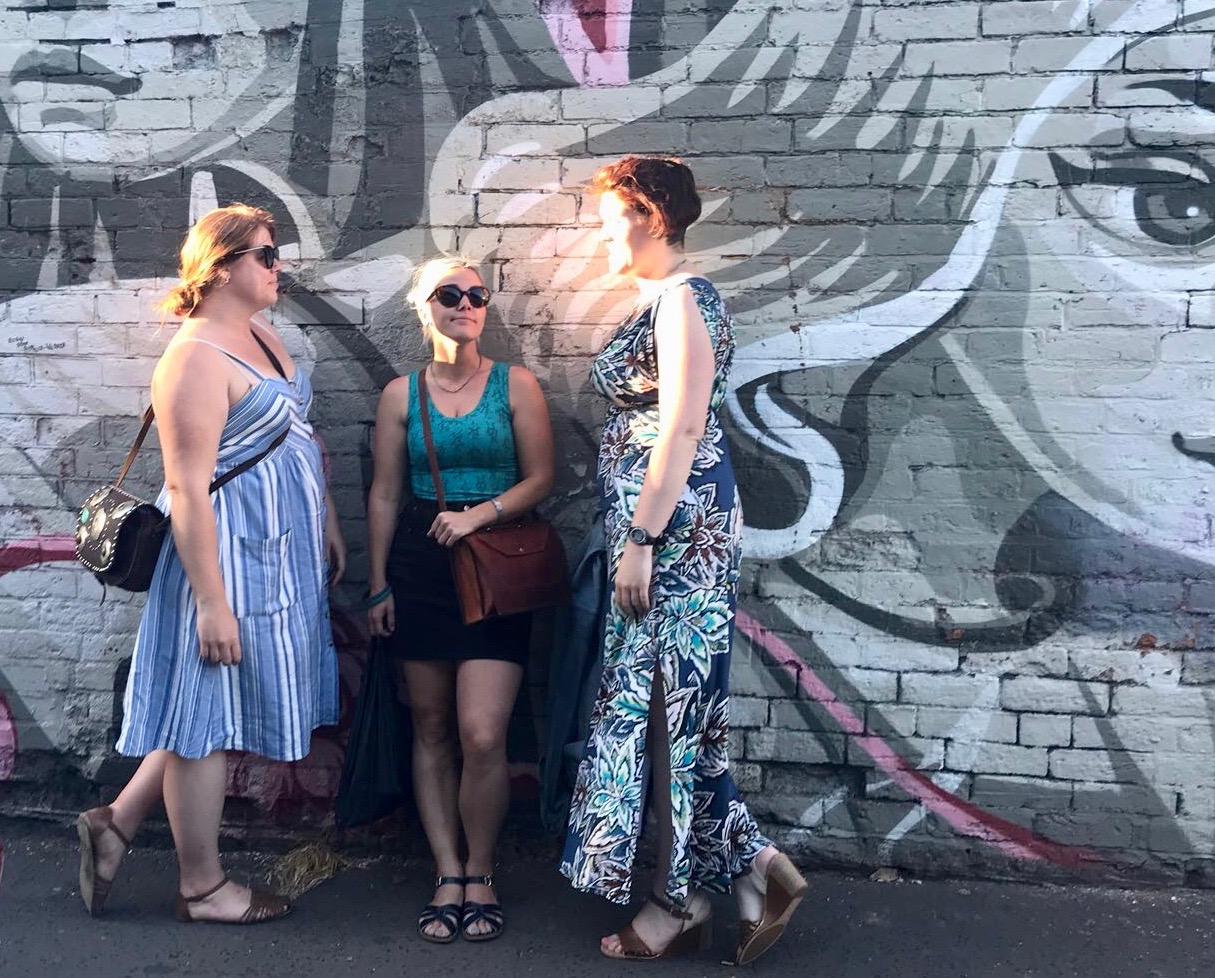 I’m still super happy to be on the road to figuring out my fit issues and can’t wait to try more from Deer and Doe.

Well, back to the DIY I guess.

3 thoughts on “The One with the Robots”

Quick snap of my @blackbirdknits Anna Tee that I f

Okay last post I promise - Just wanted to say one

Thanks so much to everyone who entered. I hope you

The votes are in and our winner is @taylor_kreuser