The world is crazy right now isn’t it?

I think sewists are probably secretly a little happy about all the “stay home” advice – more time for sewing hooray!

I mentioned previously that my sewing plans for this year had been organised by going through my stash and matching my fabrics to my patterns. Well, late last year I went thrifting with a friend and fell in love with the fabric of an XL sundress. I think it’s some kind of Rayon blend. I don’t know what it was about it but I HAD to to have it and it was way at the top of my to sew list for this year. 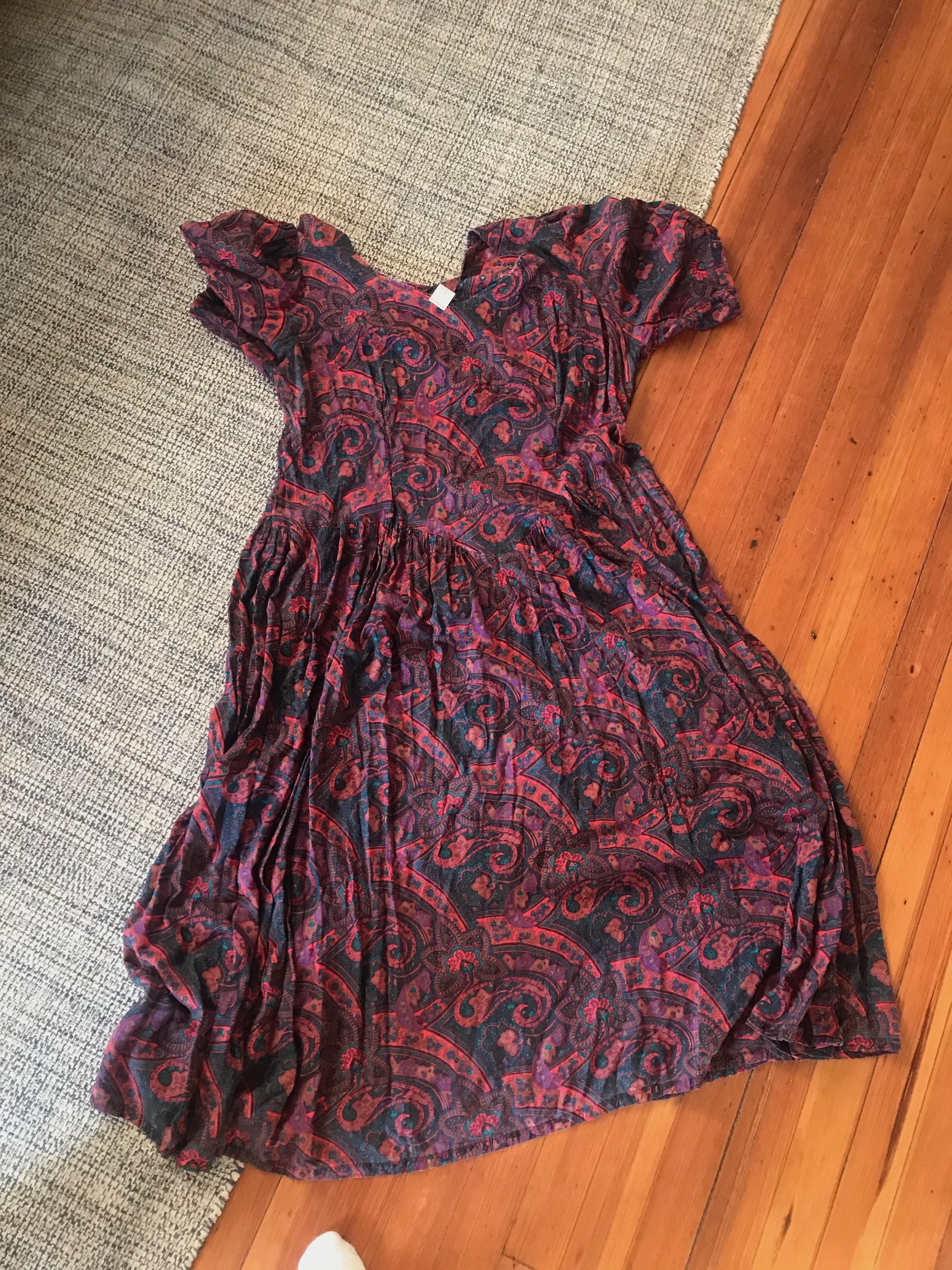 I just loved the pattern and the colour so much!

I knew I wanted a shirt dress and while I had a few in my stash I finally settled on the VOGUE V8829 view D. I generally avoid Big 4 patterns now as I tend to prefer my clothes more on the fitted size and their wearing ease is usually crazy! This was the style I wanted though so just went for it.

For Christmas my sister bought me the Gertie’s New Fashion Sketchbook and while the weather was so crappy out (I really don’t like winter), I fell in love with drawing out my makes. If you’ve never done this I really recommend it. I just use the technical drawing on the envelope as my starting point. 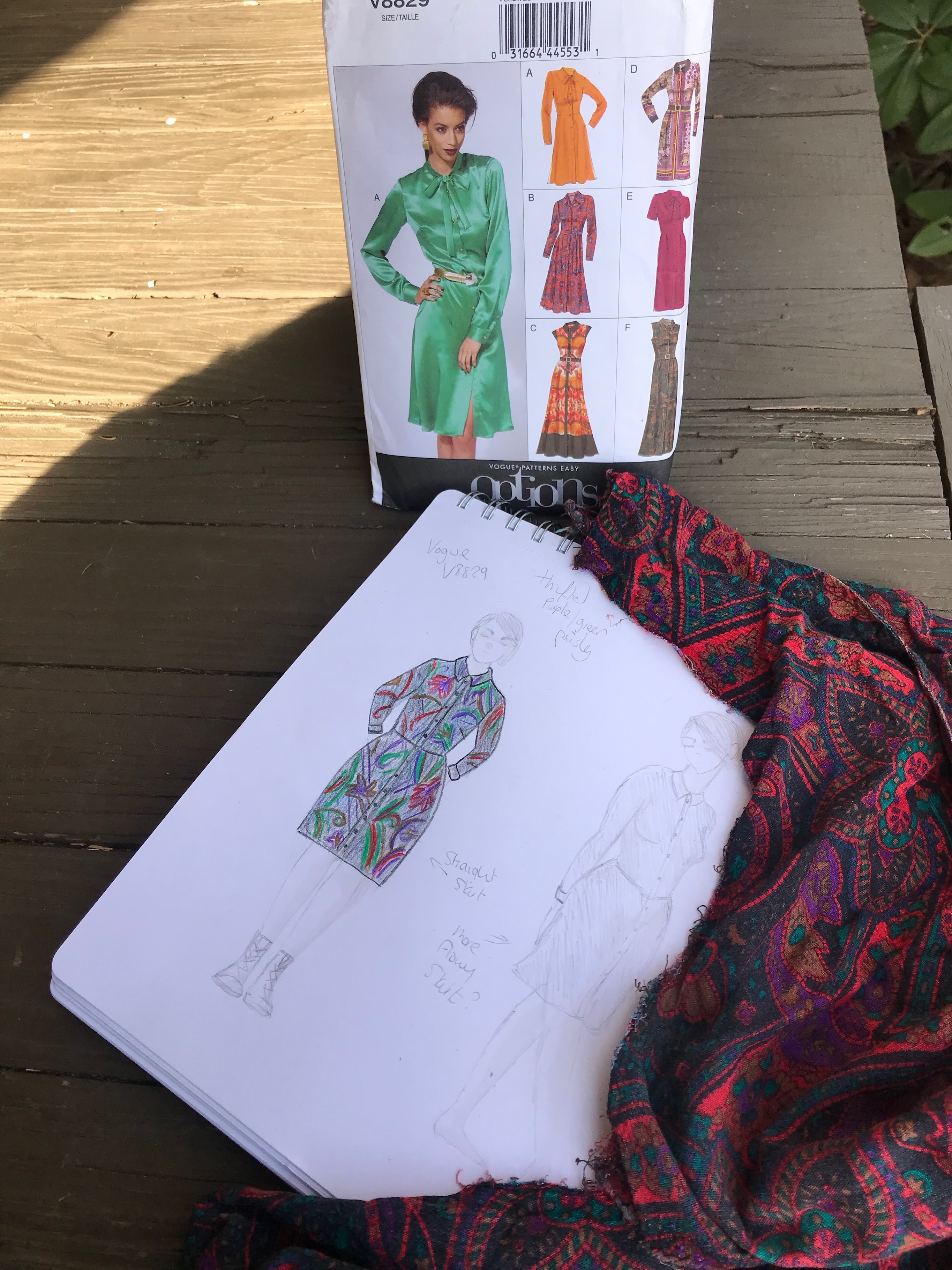 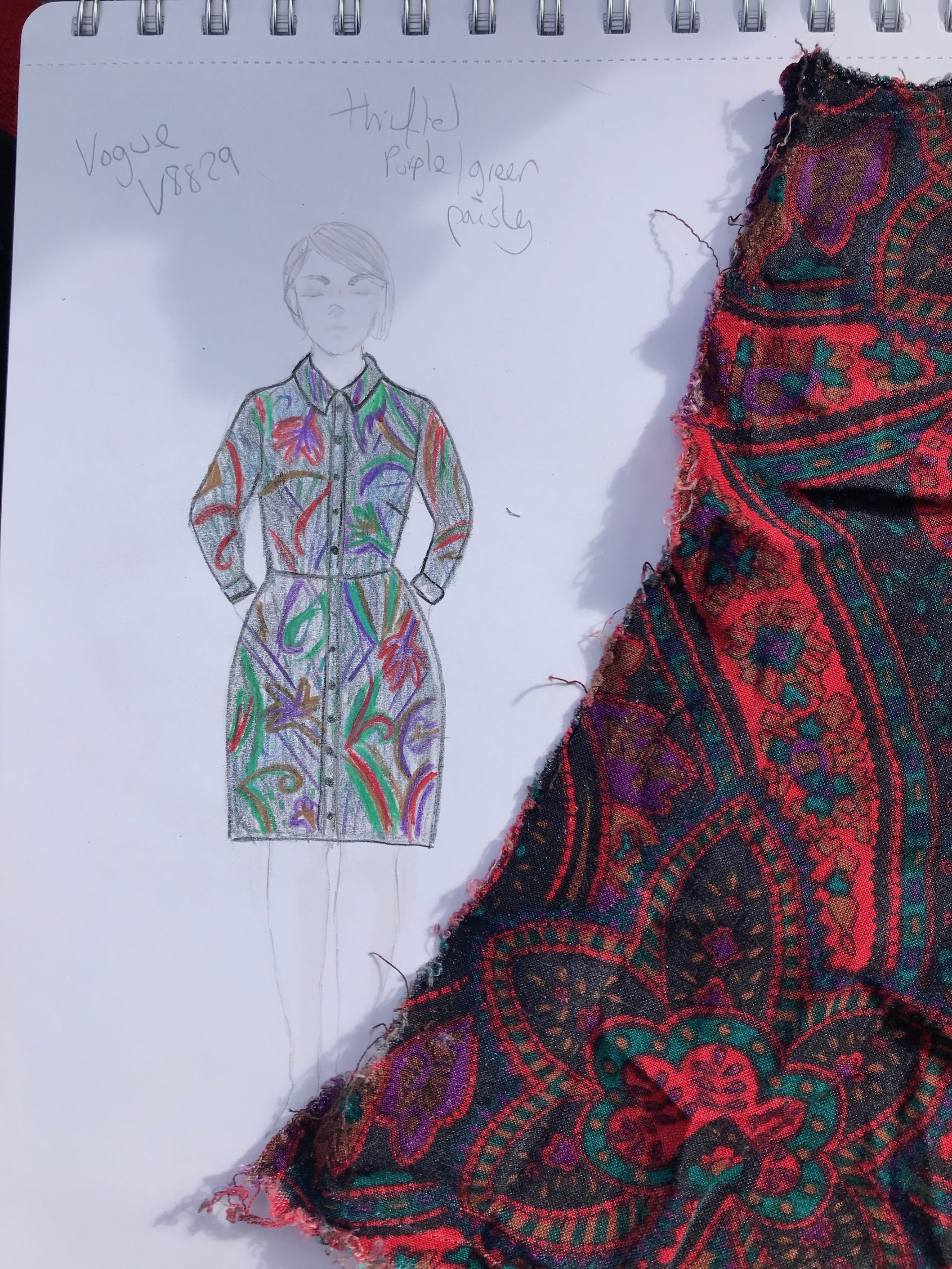 It took me a while to pick the dress apart, it was REALLY well made and I quickly realised, it was homemade! I felt a little guilty pulling someone else’s work to pieces but I was hoping the thing I planned to create would get lots of love and give the fabric a new life.

As with all my makes, I muslined before cutting into my real fabric.

From my last post you’ll know that I’ve started to learn to cut a smaller size at my neckline/shoulder and grade out under the arm. I’ve also learnt to solve my fabric pooling over chest issue by taking a dart from the armhole and shoulder, you can read more details about that here.   I did both of these things on this dress. I cut the neck and shoulders at the smallest size, an 8 and graded out to a 12 at the bust. I darted out 3/4″ at the armhole and sleeve.

After the muslin I  then ended up shortening the sleeves by almost 3.5 inches! Whose arms are that long?!?!  I lowered the dart by 3/4″ and narrowed the shoulder by 1cm (now you know why I muslin!)

From there it was time to play pattern Tetris! I managed to break the dress down to some pretty large pieces, which gave me a fair amount to work with but I was still worried. Especially as I realllllly wanted long sleeves – no idea why, just had a vision in my head and wanted to try as hard as possible to create  it. 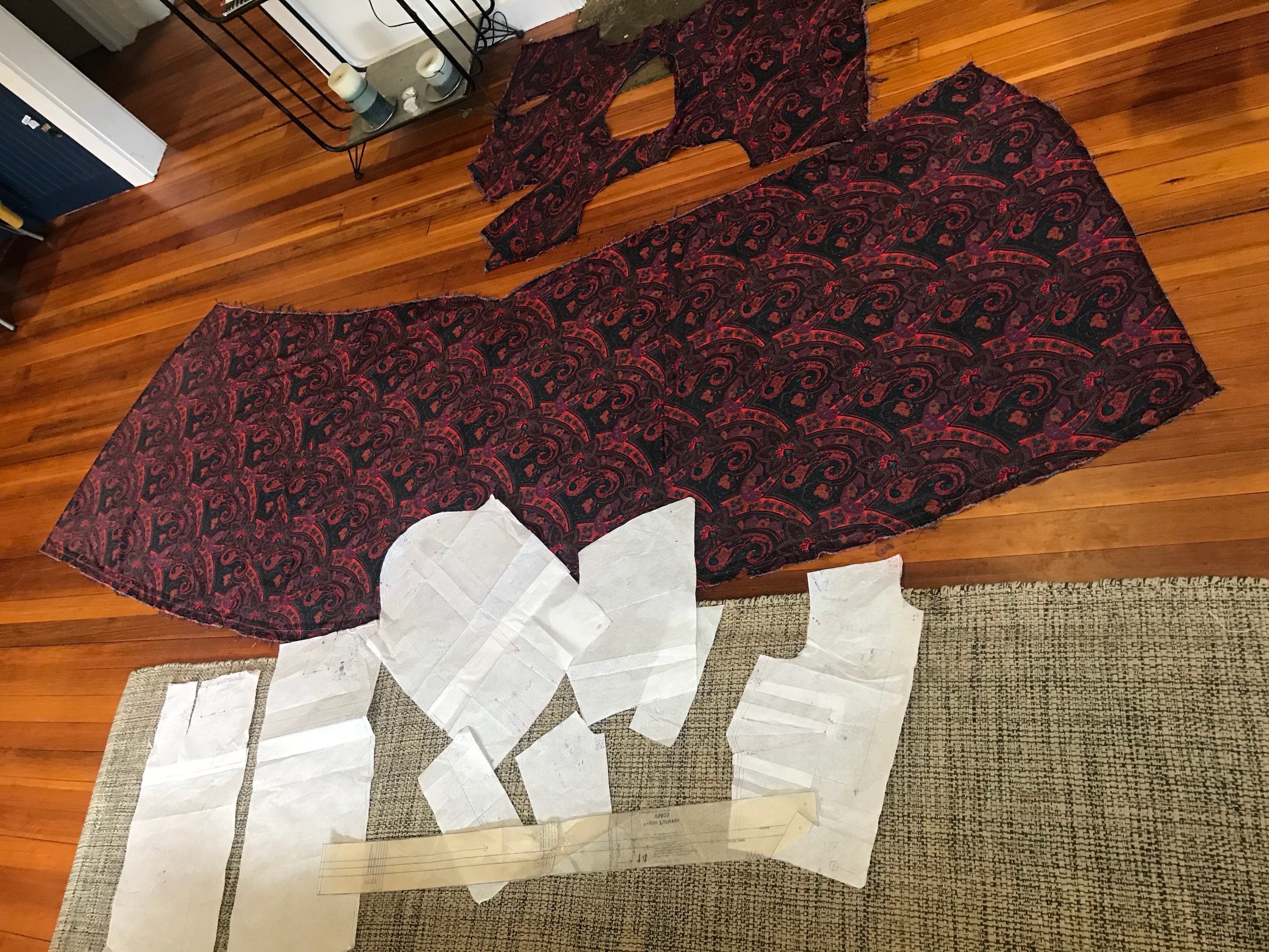 No matter how hard I tried I couldn’t find a way to cut everything out. I didn’t want to give up however so I decided to try and “piece” some parts. I figured the pattern is so busy you’re not likely to notice seam lines. In the end I had to cut my collar pieces separately rather than on the fold. Then I had to cut my sleeve pieces in half around where the elbow would be. Finally the button plackets were cut about 2 thirds of the way down. Before cutting my fabric I was sure to add on seam allowance both bits.

I really don’t think you can see them at all and it meant I got exactly the style I wanted – hooray! (Let’s just not talk about grainlines okay!) 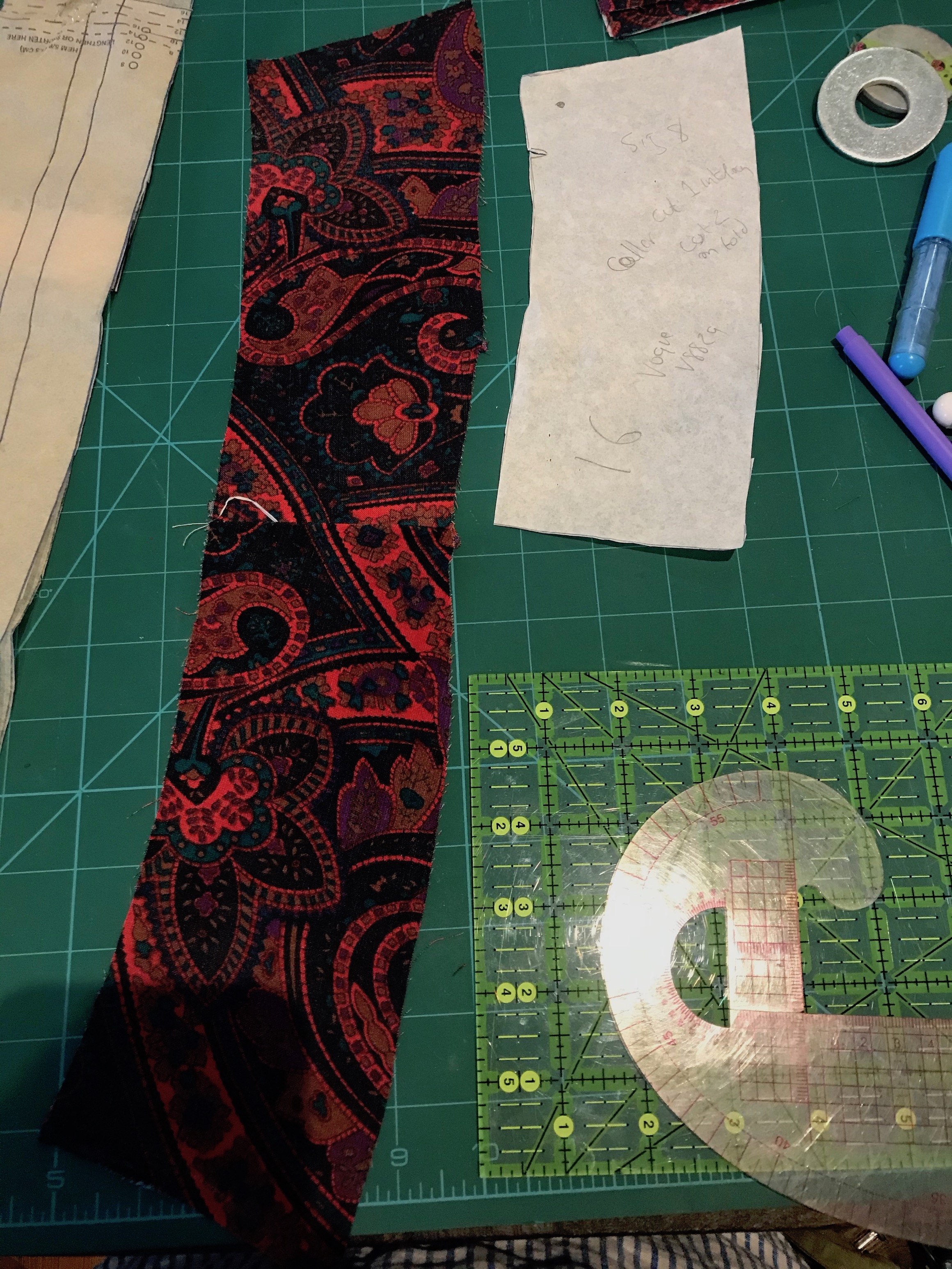 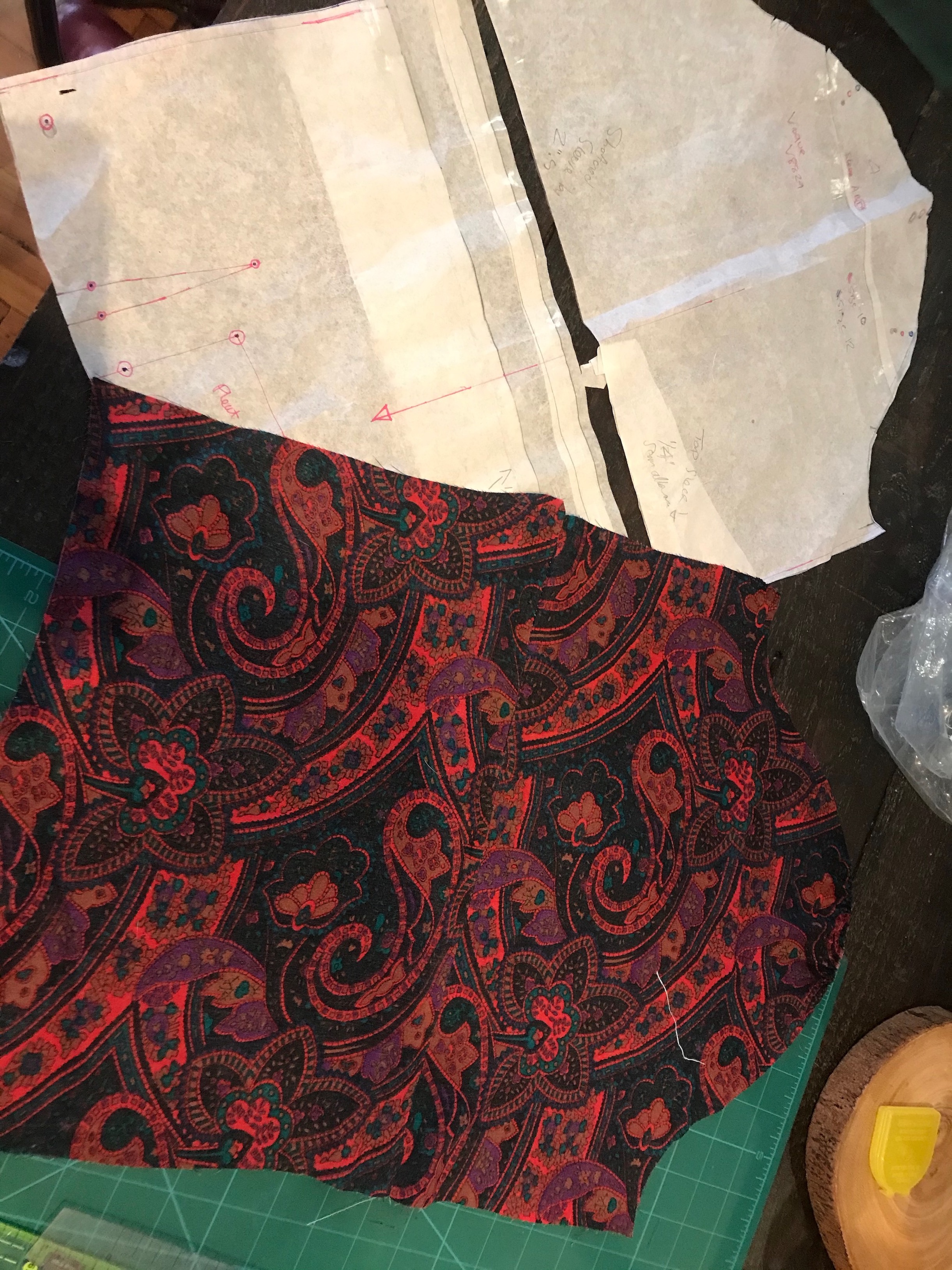 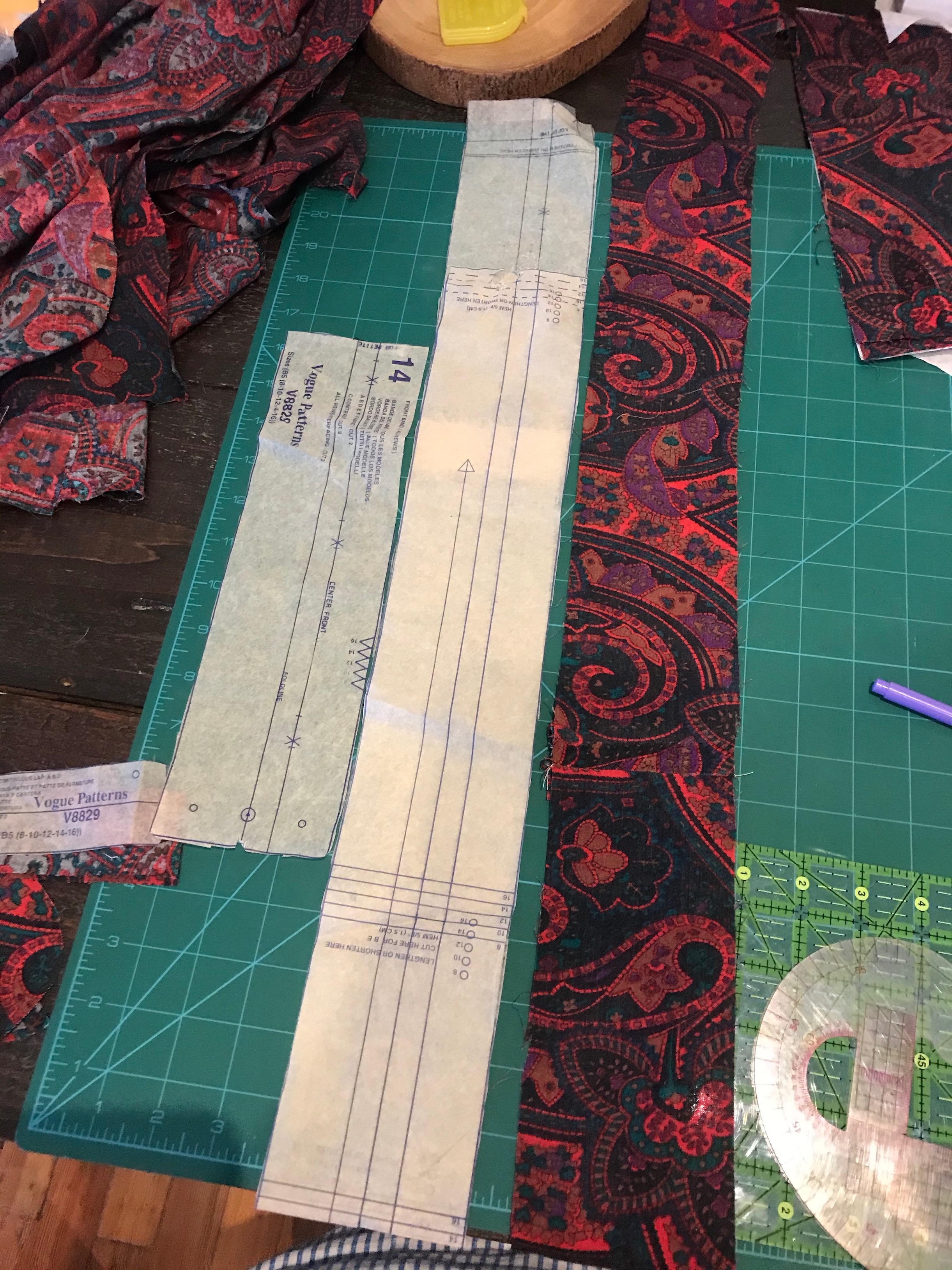 Here’s the sleeves on the finished dress – can you spot the seam line? 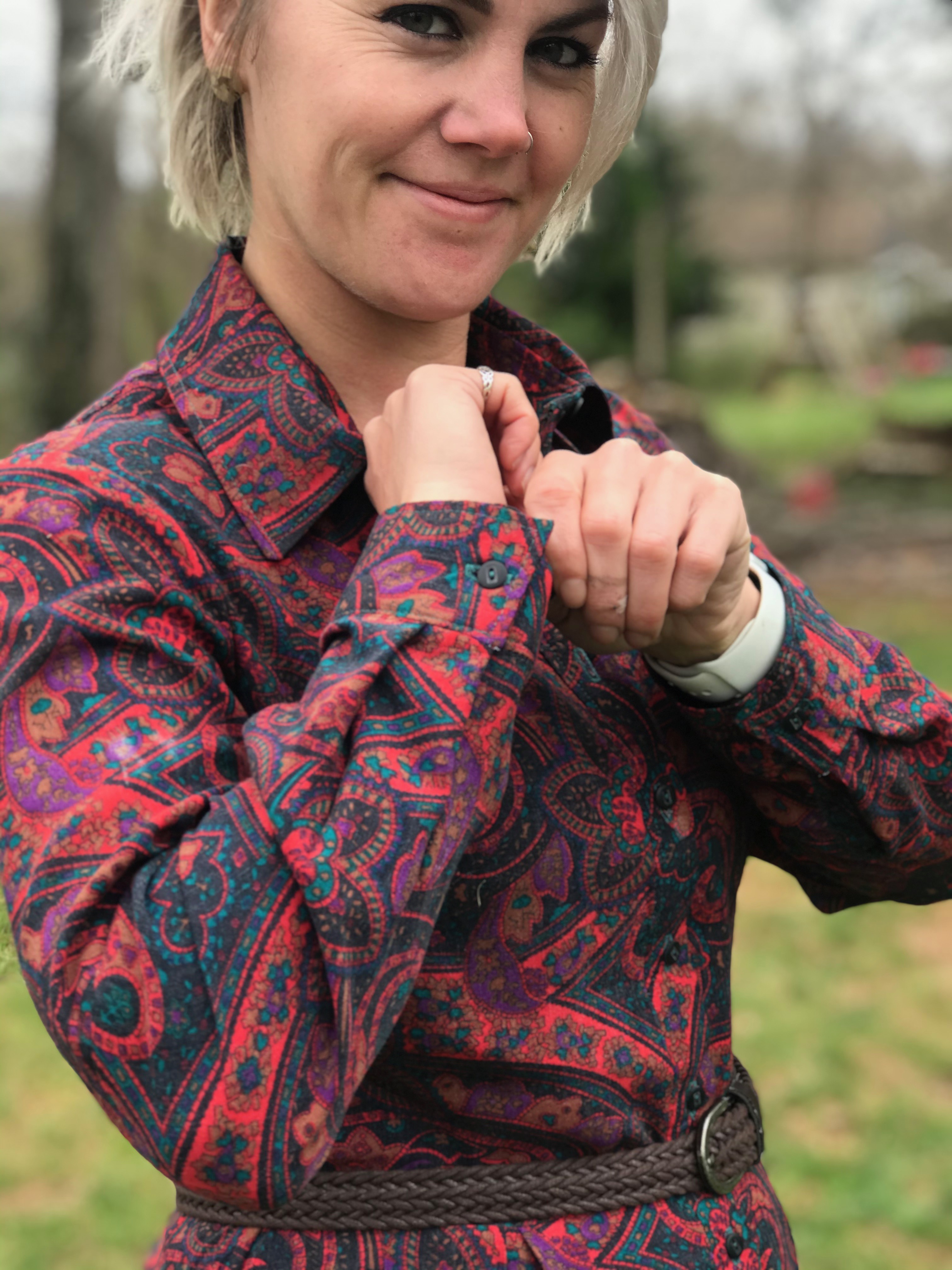 Once I’d got all my pieces cut it was go time! Because I’d muslined I didn’t worry too much about trying on as I sewed. I used lovely french seams on the the bodice and sleeve seams.

Before adding the sleeves and plackets I tried it on to test the waist seam and found that the back was puffing out quite a lot: 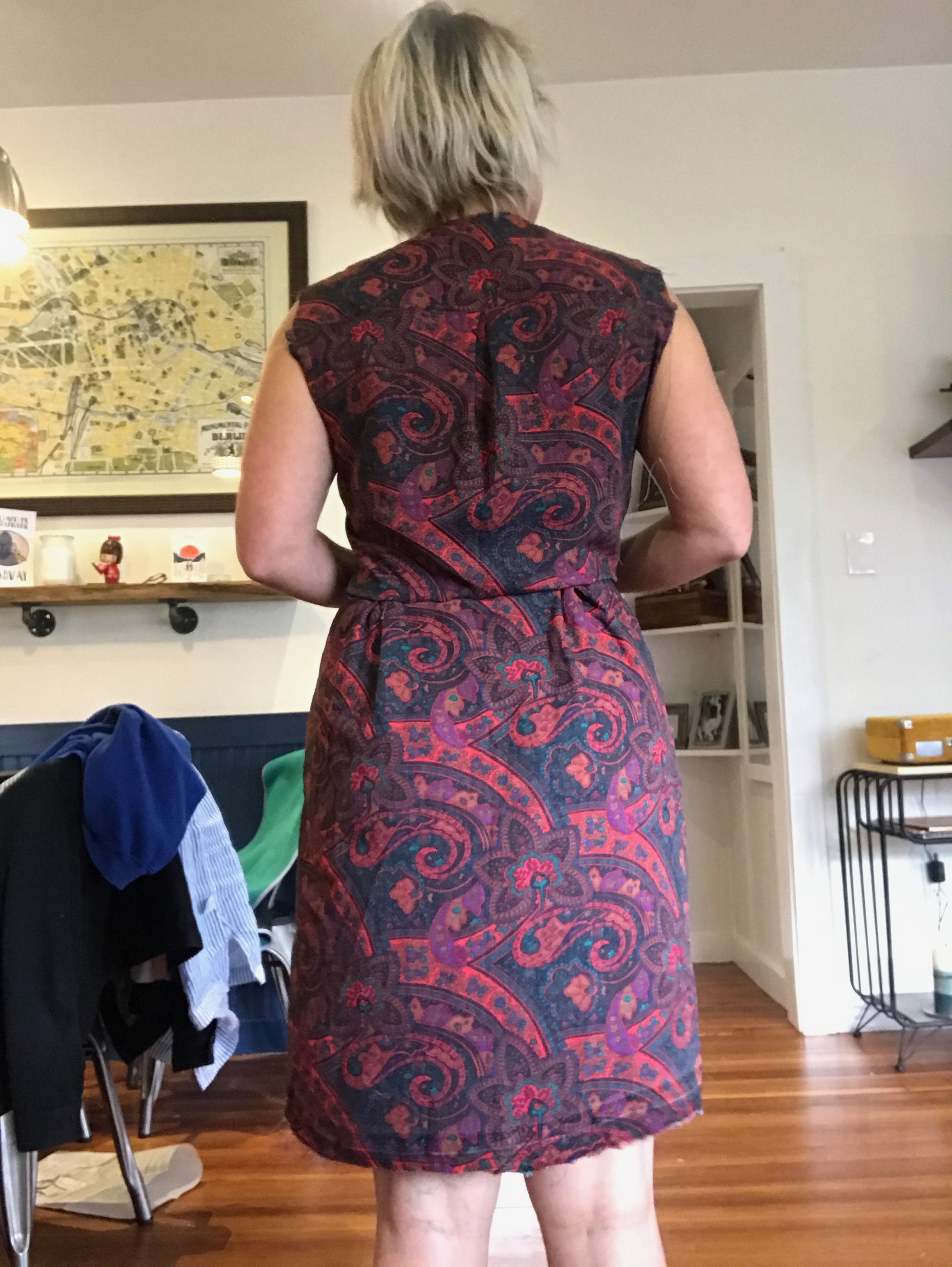 I think this was an issue of too much length and it was exaggerated by the fact the yoke had an inverted pleat. It was too late to do any major alterations but I managed to smooth it out by simply taking a larger seam allowed around the centre back of the bodice. I basically sewed my seam but then gradually scooped it out, with the largest amount coming out near CB. I think it helped a lot and really like how the pleat turned out. 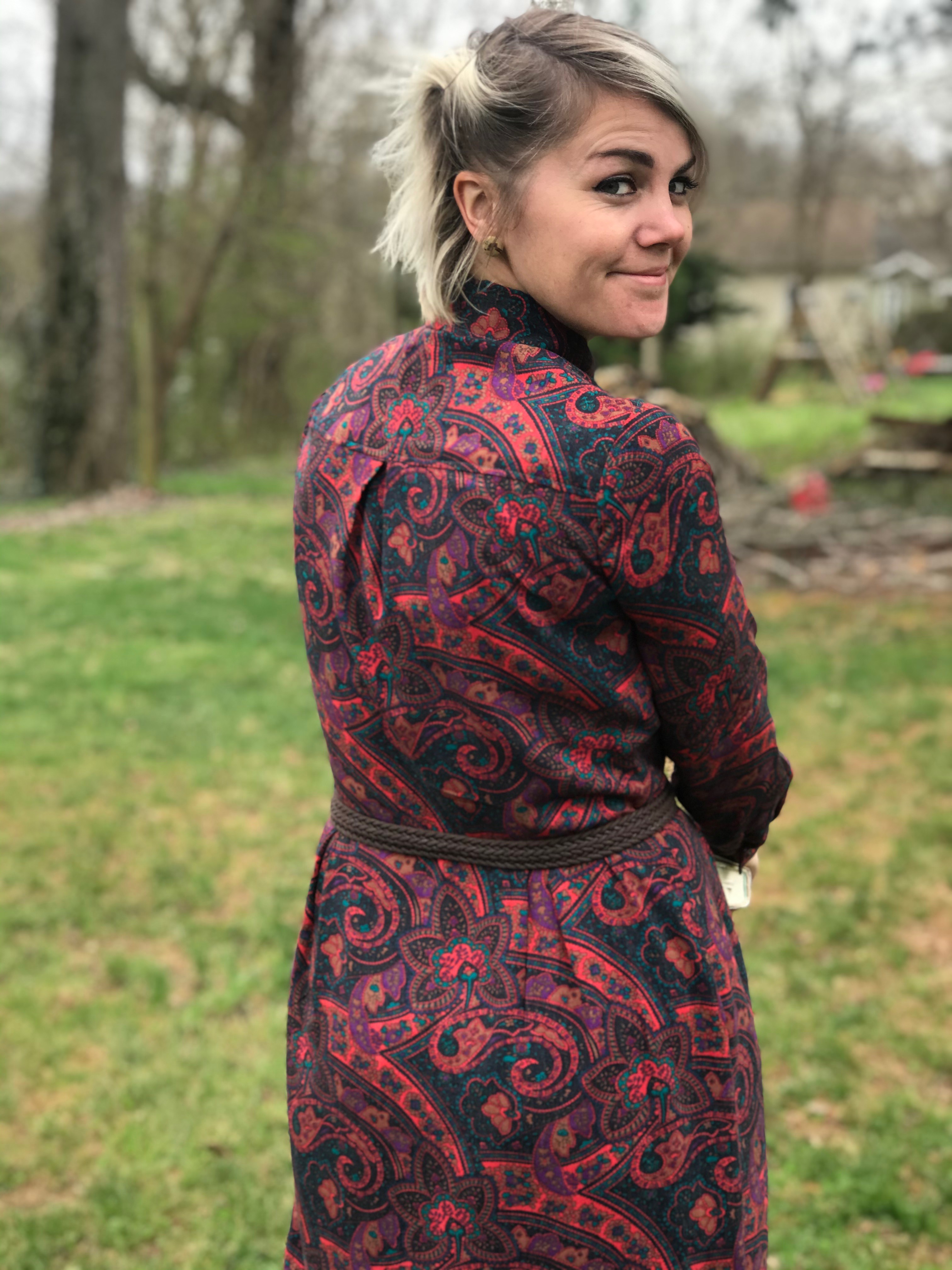 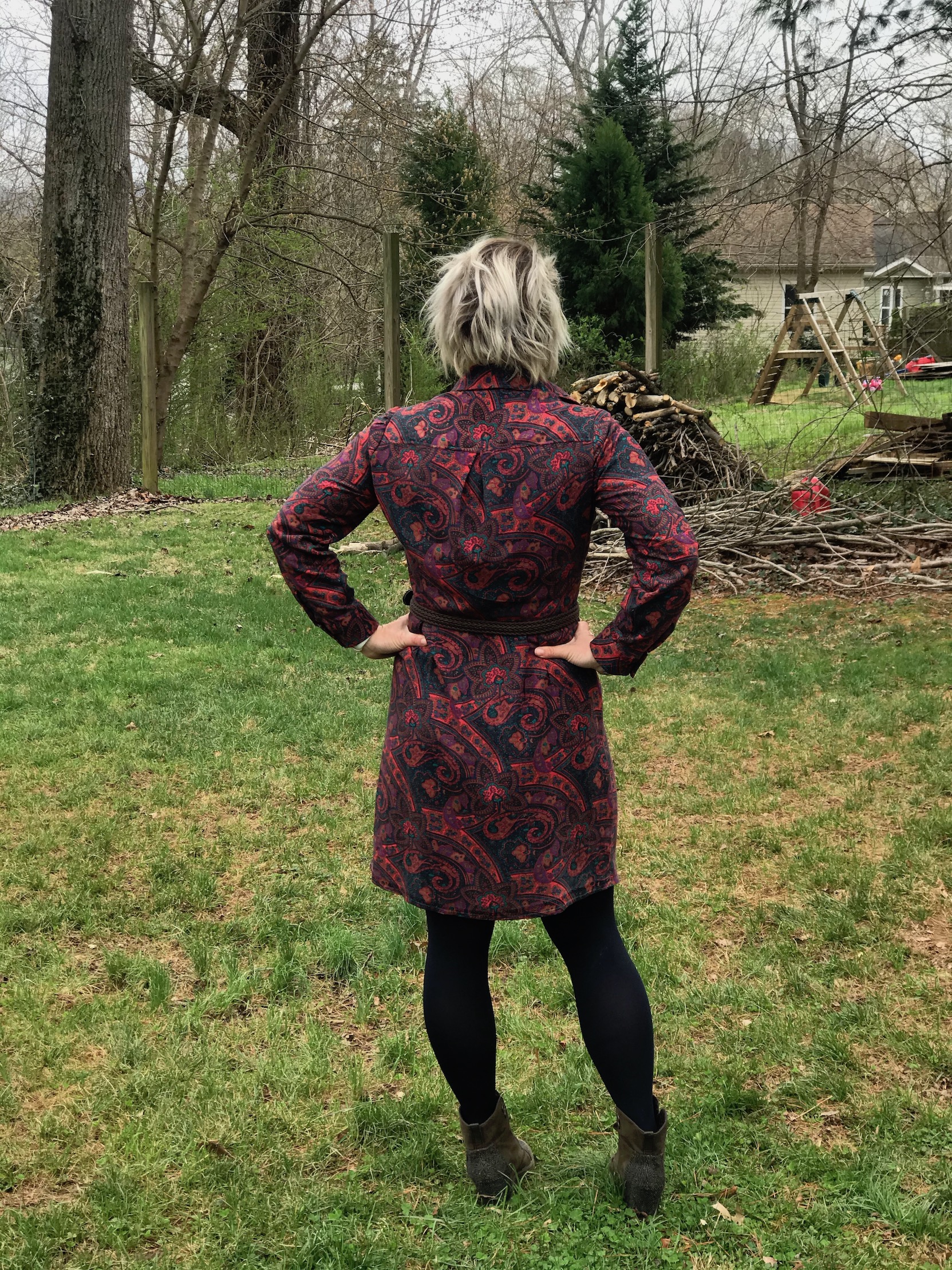 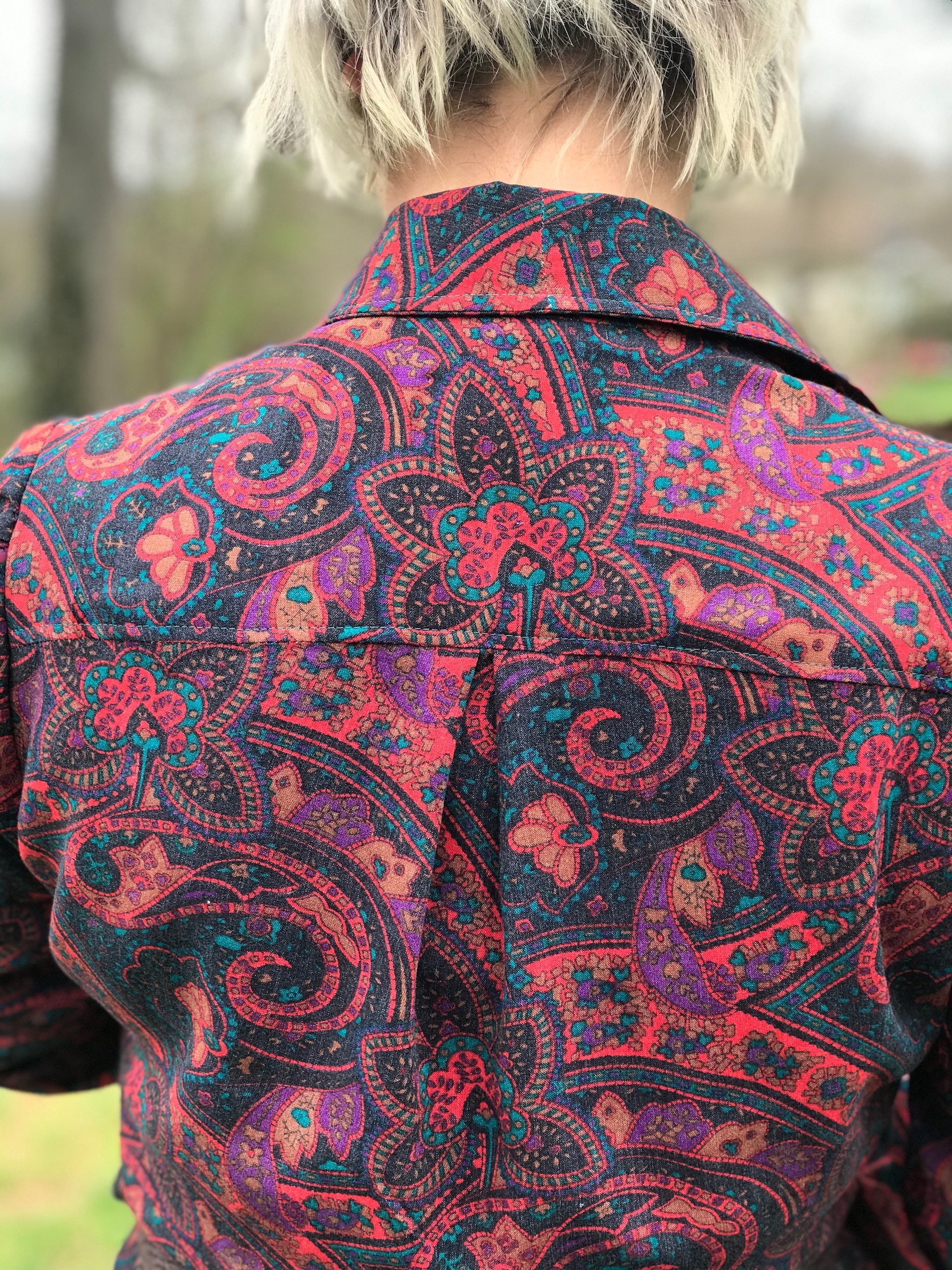 Once I’d figured that out it was sleeves, plackets and finally buttons. I LOVE shirt dresses, but man the downside is alllll the buttons! This thing has FOURTEEN! That’s fourteen button holes and fourteen hand sewn buttons!

Totally worth it though so all good. 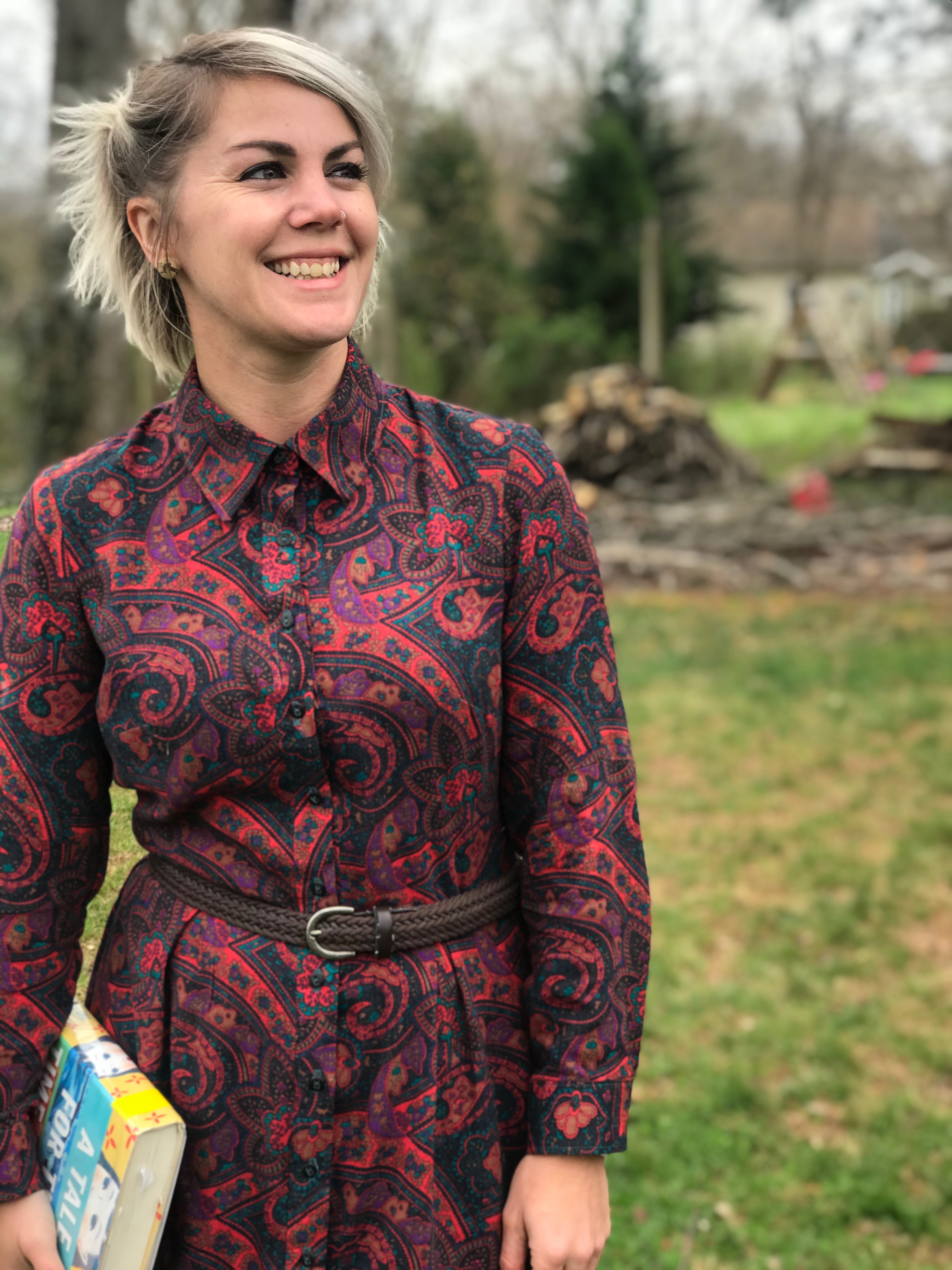 I’ve been so wanting to get this dress ready while it was still cold enough to wear it. Saturday was sunny and 75 degrees and I figured I’d missed my chance. Then Sunday rolled around and it had dropped to 45! So I quickly threw the dress on and went to take pictures – I think I got my wish a little tooo granted as it was FREEZING taking the pics! 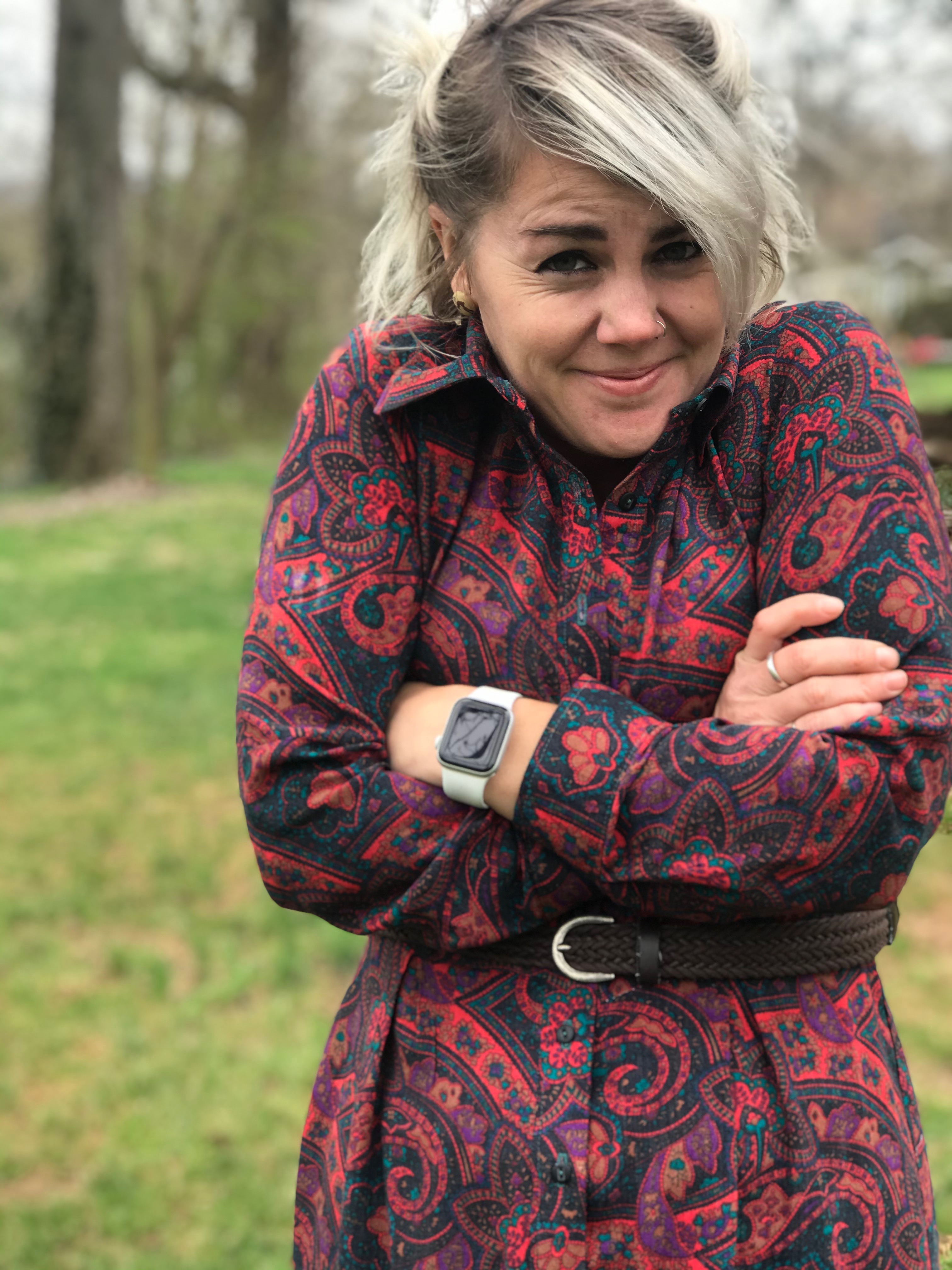 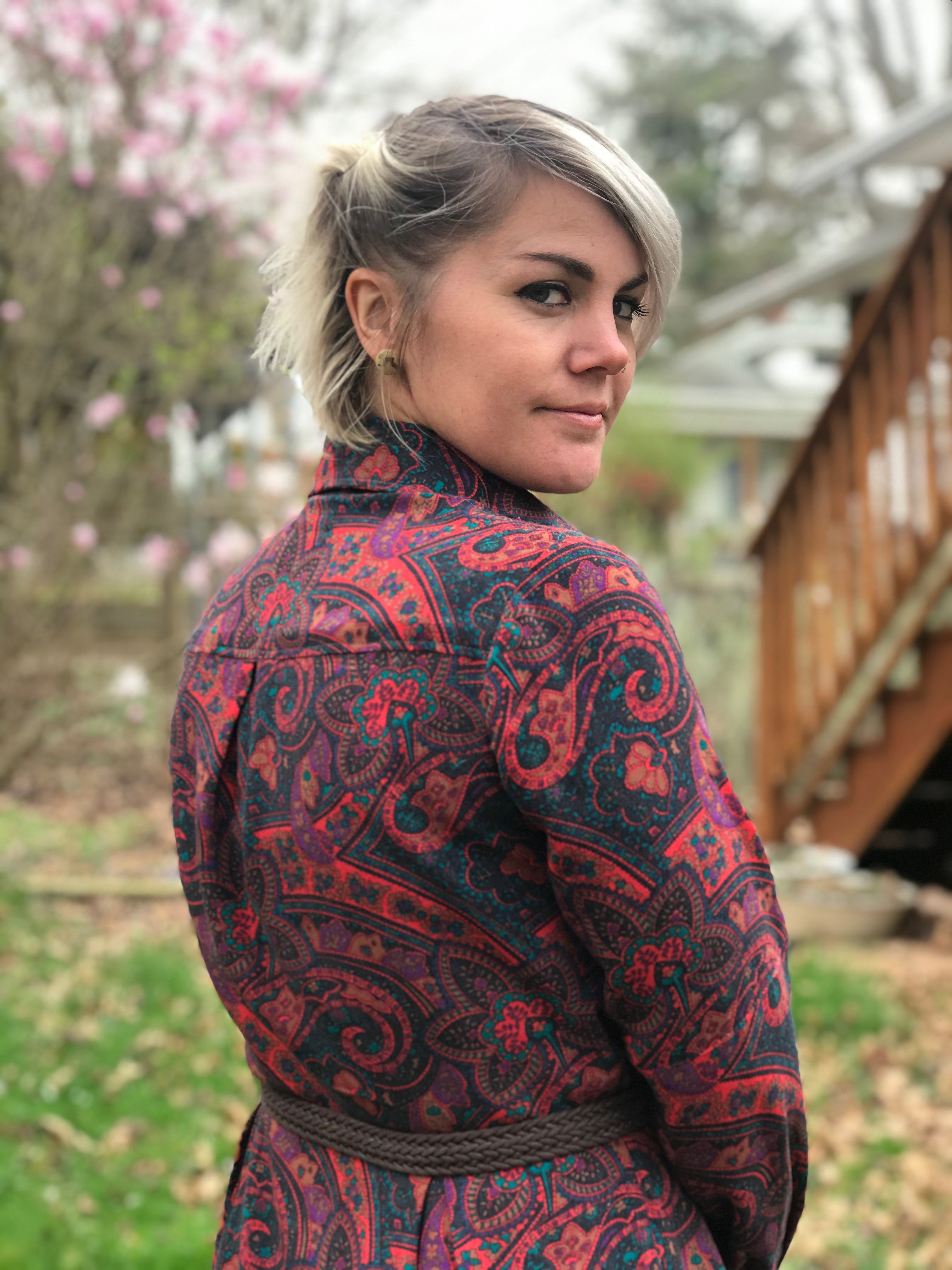 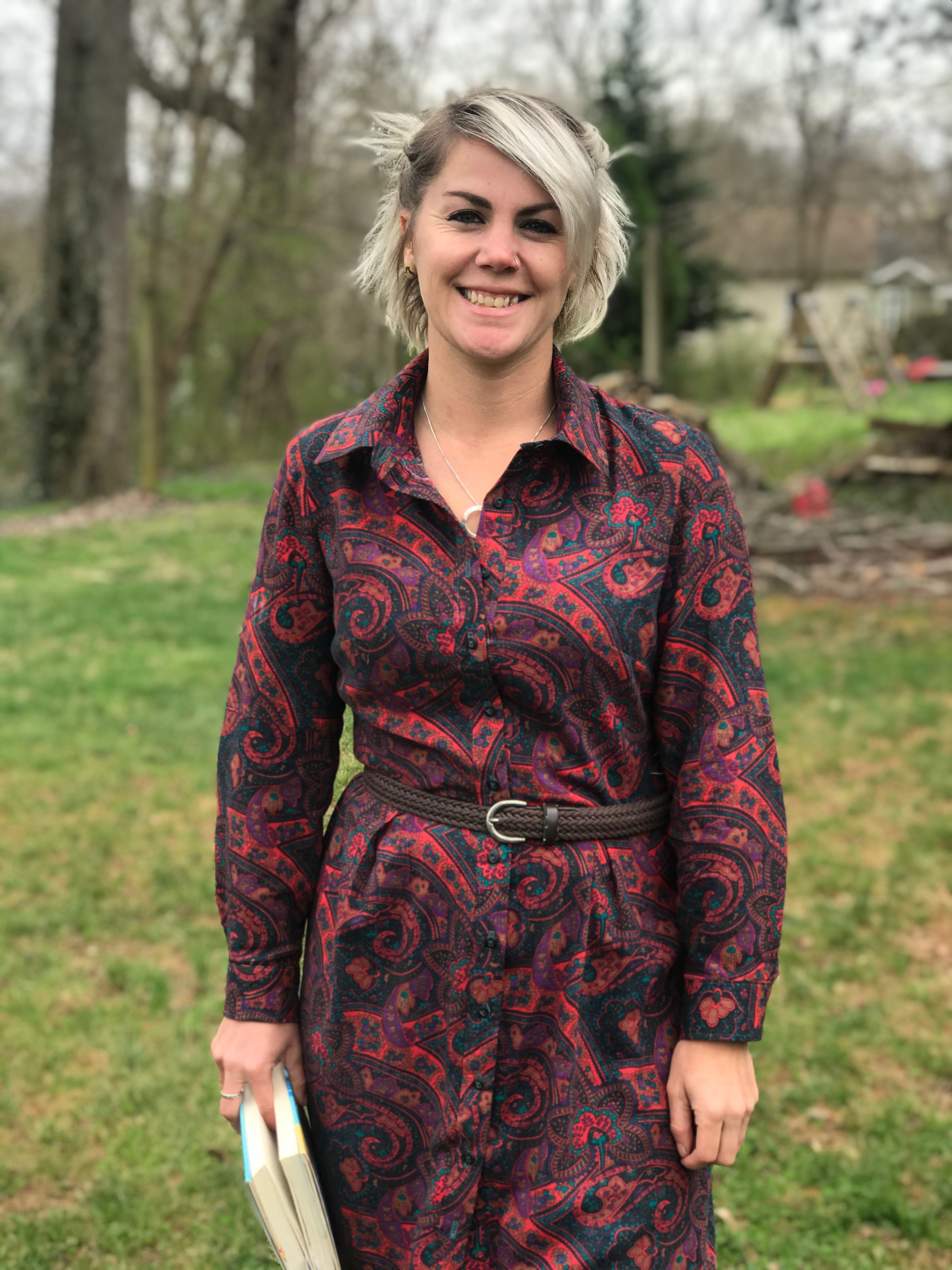 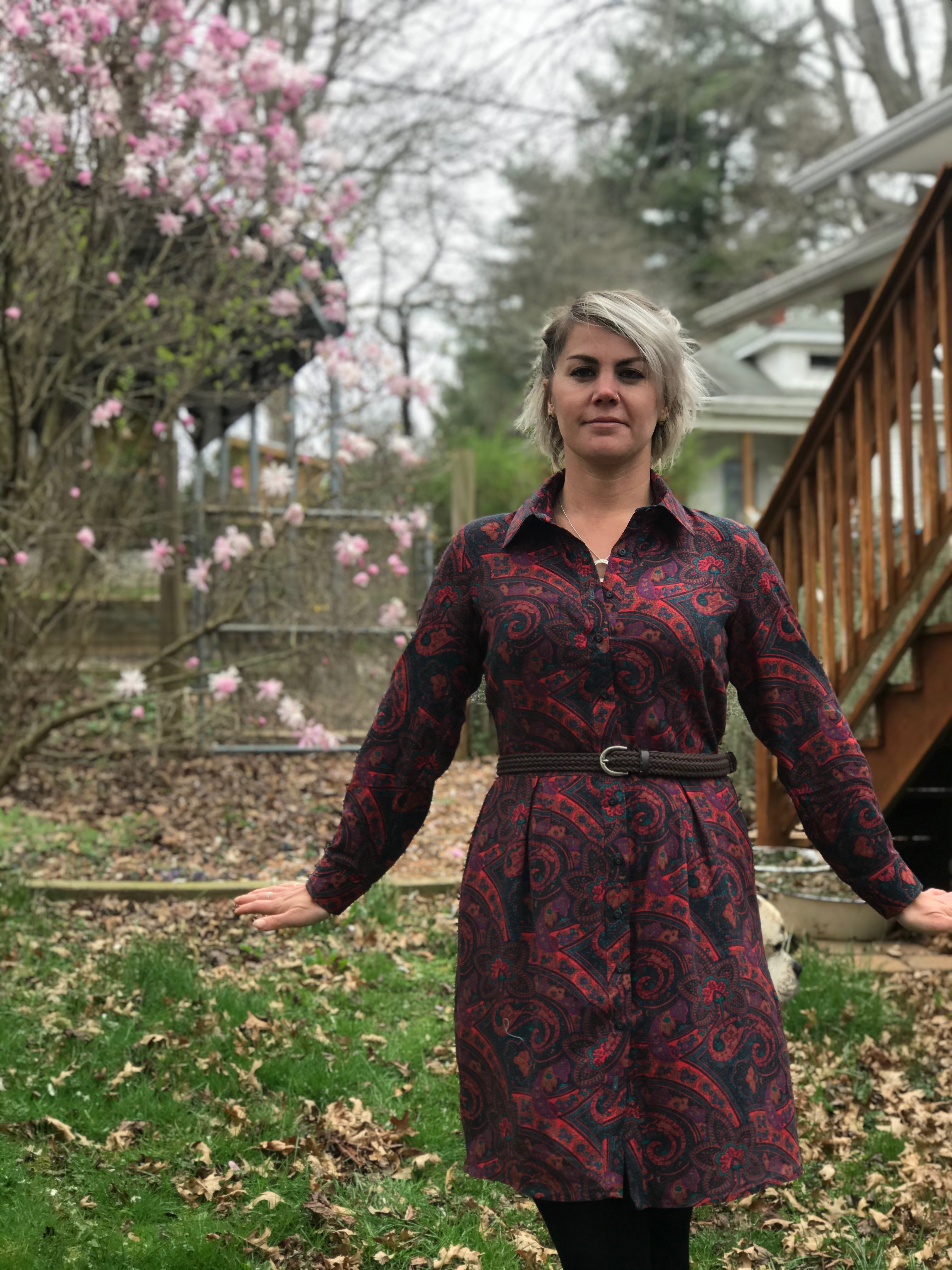 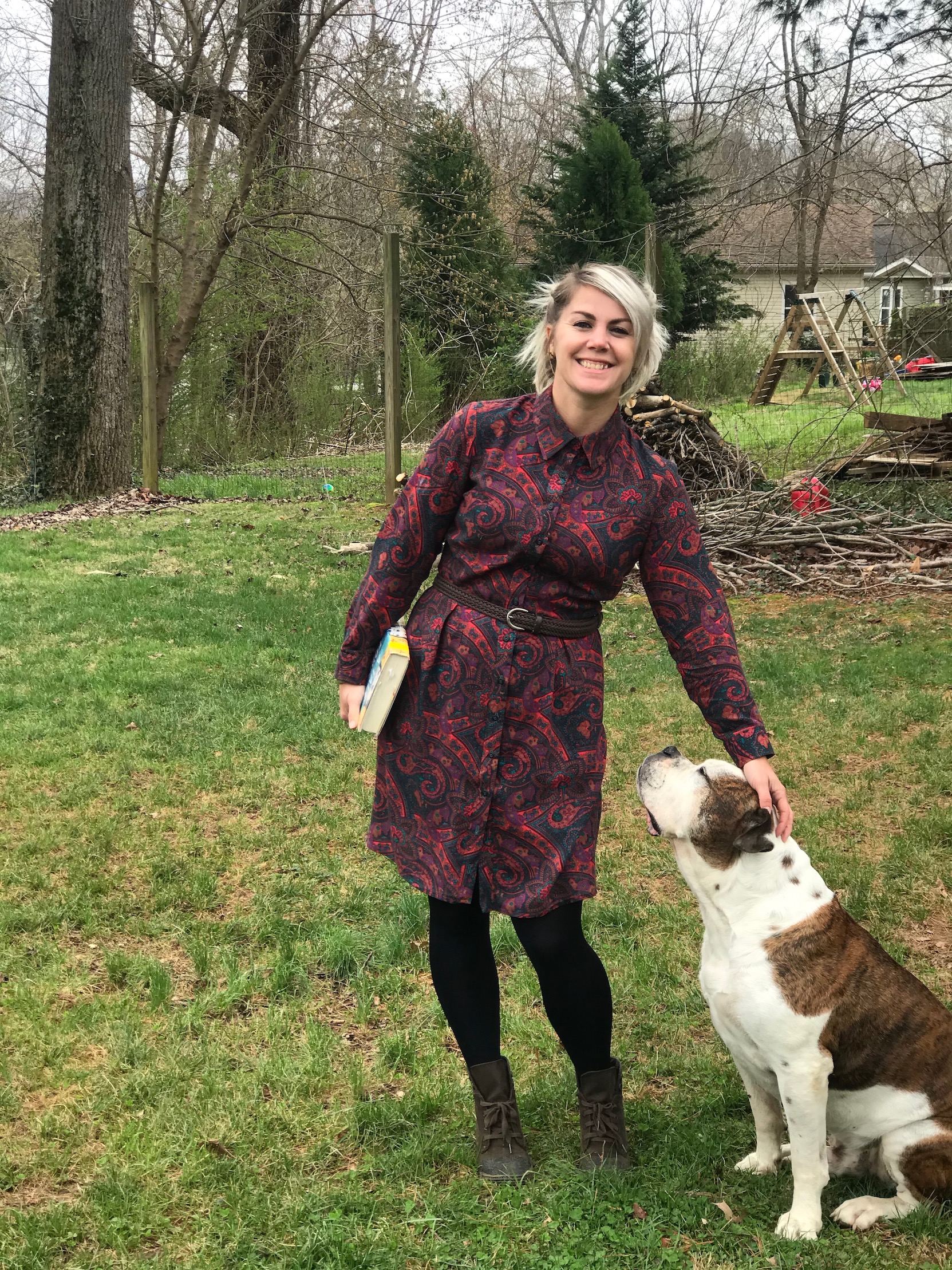 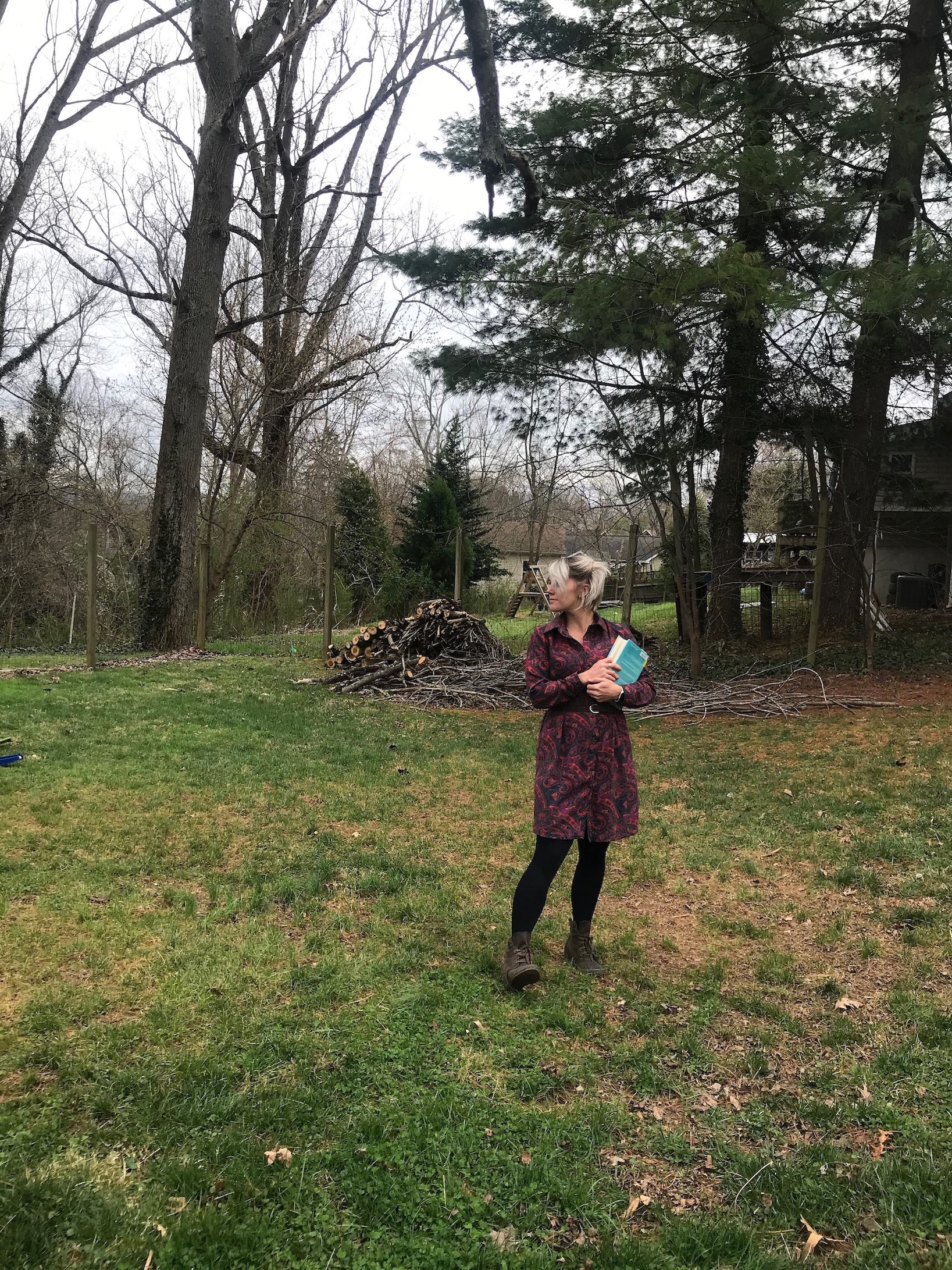 After having worn the dress I think if I were to make it again I’d drop the waist a little as it sits a bit too high for my tastes. Other than that it’s exactly the dress I imagined when I found that sundress all those months ago.

The last few weeks have been mega stressful and sa

My bestest friend is very poorly - here he is bein

Okay okay so it’s about time shared the details